The Capital of Basketball: A History of DC Area High School Hoops (Hardcover) 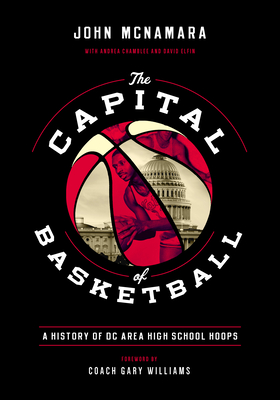 The Capital of Basketball: A History of DC Area High School Hoops (Hardcover)

The celebration of Washington D.C. basketball is long overdue. The D.C. metro area stands second to none in its contributions to the game. Countless figures who have had a significant impact on the sport over the years have roots in the region, including E.B. Henderson, the first African-American certified to teach public school physical education, and Earl Lloyd, the first African-American to take the court in an actual NBA game. The city's Spingarn High School produced two players - Elgin Baylor and Dave Bing - recognized among the NBA's 50 greatest at the League's 50th anniversary celebration. No other high school in the country can make that claim.These figures and many others are chronicled in this book, the first-ever comprehensive look at the great high school players, teams and coaches in the D.C. metropolitan area. Based on more than 150 interviews, The Capital of Basketball is first and foremost a book about basketball. But in discussing the trends and evolution of the game, McNamara also uncovers the turmoil in the lives of the players and area residents as they dealt with prejudice, educational inequities, politics, and the ways the area has changed through the years.

John McNamara (@CapitalofBBall) was a staff writer for the Annapolis Capital newspaper. He earned a degree in Journalism from the University of Maryland and spent over 30 years covering local, college, and professional sports. He won several awards from the Maryland-DC-Delaware Press Association for his writing. McNamara was one of five employees of the Annapolis Capital who were gunned down in a mass shooting at the newspaper on June 28, 2018. He was 56 years old. The University's Philip Merrill College of Journalism established an Award and a Scholarship in his name for sports journalism. He was inducted into the Maryland High School Football Coaches Hall of Fame; the Press Area at the City of Bowie is named in his honor; his name is included on the Newseum's Journalists Wall; and he was among Time Magazine's Persons of the Year for 2018.