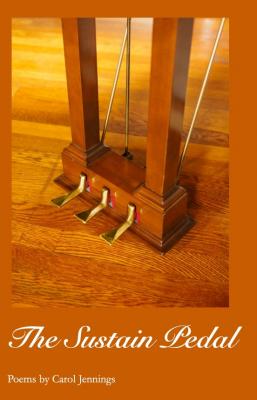 In The Sustain Pedal, Carol Jennings continues the poetic journey she began in The Dead Spirits at the Piano. Her poems create a connection with the composers she listens to and plays on the piano-Beethoven, Chopin, Brahms, Mendelssohn-as well as with the natural world she loves and mourns for what is being lost. Retreating glaciers, volcanoes, coral reefs, viruses, the outer edge of the solar system-her poetic craft evokes both what we cannot control and what we must learn to control to survive.

"Carol Jennings has written a masterful composition, one which marks her best work yet, a music which rises above motifs of pain and joy 'the way a flickering light,' she writes, 'can trick the eye to see it as a constant.' With homages to Beethoven, Chopin, Mendelssohn, and more, the poems serve as antidote against the violence we have done each other, to the planet, and even to ourselves. It ends with singing, a pivot from lament to praise-from what is passing to what maintains-on the wings of music and its sustaining powers. 'In a Previous Life,' 'A Flickering light,' 'Sacraments,' and 'Scissors' are beautiful pieces of writing, elevating language to touch the mystical: 'Music became my sacrament,' Jennings writes, and the same could be said for the poetry, her persevering song. An exquisite successor to her first collection, The Sustain Pedal places Carol Jennings firmly at the top of her powers."-David Keplinger, author of The World to Come

"In The Sustain Pedal, Carol Jennings explores the joyful creations as well as the deleterious effects of 'the warm human finger-print.' While she celebrates 'music that outlives its composer,' she also calls our species to account for warming coral reefs and glaciers. A time-traveler, she imagines the life of a woman trapped in the lava flow at Pompeii; she converses with Beethoven; she visits the dead in dreams. Playing 'irreverent Mozart/and Lutheran Bach' on the piano or looking at a seashell, Jennings experiences 'layers of luster and symmetry.' Next, we look with her as she peers, fearless, into the 'abyss of violent time.'"-Robin Becker, author of The Black Bear Inside Me