The Horrible Peace: British Veterans and the End of the Napoleonic Wars (Paperback) 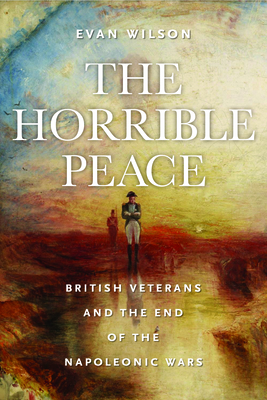 The Horrible Peace: British Veterans and the End of the Napoleonic Wars (Paperback)

Few battles in world history provide a cleaner dividing line than Waterloo: before, there was Napoleon; after, there was the Pax Britannica. While Waterloo marked France’s defeat and Britain’s ascendance as an imperial power, the war was far from over for many soldiers and sailors, who were forced to contend with the lasting effects of battlefield trauma, the realities of an impossibly tight labor market, and growing social unrest. The Horrible Peace details a story of distress and discontent, of victory complicated by volcanism, and of the challenges facing Britain at the beginning of its victorious century.

Examining the process of demobilization and its consequences for British society, Evan Wilson draws on archival research and veterans’ memoirs to tell the story of this period through the experiences of veterans who struggled to reintegrate and soldiers and sailors who remained in service as Britain attempted to defend and expand the empire. Veterans were indeed central to Britain’s experience of peace, as they took to the streets to protest the government’s indifference to widespread unemployment and misery. The fighting did not stop at Waterloo.

EVAN WILSON is associate professor at the U.S. Naval War College and author of A Social History of British Naval Officers, 1775–1815.

“The Horrible Peace makes novel arguments, and its focus on demobilization offers a truly original take on the Napoleonic era. This is a vital book and represents a crucial contribution to our understanding of warfare, politics, and society in early nineteenth-century Britain.”—James Davey, author of In Nelson’s Wake: The Navy and the Napoleonic Wars

“By welding together the post-war political battles—establishment politicians against radicals, bosses against industrial workers—and further weaving into that the fate of thousands of demobilized soldiers and sailors, Wilson produces an exciting and unpredictable narrative, well explained.”—Roger Knight, author of Convoys: The British Struggle Against Napoleonic Europe and America

“The Horrible Peace is a seminal work. Broad ranging but sharply focused, it is the first history of British demobilization at the end of the Napoleonic Wars and its consequences. It fills a major gap in the existing literature and raises broader questions about the nature of early nineteenth-century Britain.”—Martin Wilcox, lecturer in history at the University of Hull