The Poetic Edda: Stories of the Norse Gods and Heroes (Hackett Classics) (Paperback) 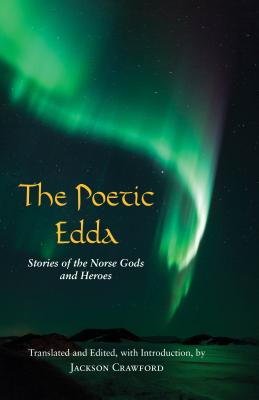 The Poetic Edda: Stories of the Norse Gods and Heroes (Hackett Classics) (Paperback)


Special Order—Subject to Availability
(This book cannot be returned.)
"The poems of the Poetic Edda have waited a long time for a Modern English translation that would do them justice. Here it is at last (Odin be praised ) and well worth the wait. These amazing texts from a 13th-century Icelandic manuscript are of huge historical, mythological and literary importance, containing the lion's share of information that survives today about the gods and heroes of pre-Christian Scandinavians, their unique vision of the beginning and end of the world, etc. Jackson Crawford's modern versions of these poems are authoritative and fluent and often very gripping. With their individual headnotes and complementary general introduction, they supply today's readers with most of what they need to know in order to understand and appreciate the beliefs, motivations, and values of the Vikings."
--Dick Ringler, Professor Emeritus of English and Scandinavian Studies at the University of Wisconsin-Madison
After more than a decade as a full-time Instructor in Scandinavian Studies at such institutions as the University of Colorado Boulder, the University of California-Berkeley, and the University of California-Los Angeles, Dr. Jackson Crawford became a full-time public educator in all things Old Norse in 2020. Among other accomplishments, he has built up a large YouTube following and served as an Old Norse language and runes consultant on major multimedia projects, including some of today's most popular films and video games. He is currently a Resident Scholar at the Center of the American West at the University of Colorado Boulder. Learn more at www.jacksonwcrawford.com.