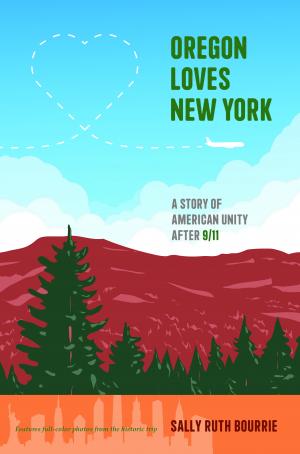 Oregon Loves New York: A Story of American Unity after 9/11
Three weeks after the 9/11 terrorist attacks, when the world was afraid to get on an airplane, much less a plane to New York City, one in every 3,000 Oregonians—1,000 in all—took 62 flights to show the terrorists they didn’t win and to boost the tanking New York economy. What they found were fellow Americans who needed more than their money, they needed their hearts. The Flight for Freedom is a little-known story of Americans at their best, showing up for their fellow Americans in a time of tragedy.

The symbolic commitment to be a part of the recovery of New York from these horrible attacks meant a great deal to all New Yorkers and sent a very positive message to the entire nation. The Flight for Freedom demonstrated that people from 3,000 miles across the continent felt comfortable and safe in the streets,and that message got out in the rest of the country.
-Former New York Governor George Pataki

Oregonians of a previous age, they walked 3,000 miles to go there, despite the hardships and some fear that our forebears had. Oregonians of our time showed courage to board airplanes at a time of severe restriction and insecurity and showed with their wallets and their shoe leather that hearts were one with New Yorkers. This was a bright, shining moment for Oregon.
-Former Oregon Senator Gordon H. Smith

With Oregonians’ Flight for Freedom, the people of my State are standing shoulder to shoulder with the citizens of New York in an effort to make clear that no terrorist can break the American spirit. I urge all Americans to follow their example.
-Senator Ron Wyden speaking on the floor of the U.S. Senate, October 4, 2001

I came to this country sixty years ago as a refugee, an immigrant, with absolutely nothing, no hope, no future except what we’re going to make of it—and here I am leading the delegation down Fifth Avenue. And then, to see New Yorkers opening up their hearts to us. Not only did they give me something back,we were able to give them something back. It was just mind-blowing for all of us.
-Portland Mayor Vera Katz on leading the Freedom Fliers in the 2001 New York Columbus Day Parade on the anniversary of arriving in New York City as a Holocaust refugee

Something powerful happened in New York. We had a rare opportunity to experience the healing power of human-to-human contact and to honor our highest nature.
-Jan Woodruff, Portland State University Director of Marketing and Freedom Flier