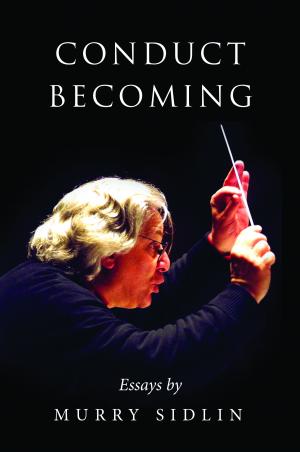 “ The key to Sidlin is his belief that music has the moral power to ennoble listeners. That’s why he wants everyone around him to hear it, think about it, and be changed by it.” —David Stabler, The Oregonian

“The conception of the conductor, Murry Sidlin, was marked by an irresistible, spiritual propulsion tempered with an actor’s timing [Beethoven Missa Solemnis].” —The New York Times

Conductor Murry Sidlin has devoted his life to making profound music with orchestras around the world in ground-breaking, imaginative new ways. Sidlin’s career spans thirty-three years teaching conducting at the Aspen Music Festival, co-creating with the world’s finest orchestras, and rescuing Aaron Copland’s opera, The Tender Land in an orchestration embraced by the composer for a new life in performance across the country. This memoir includes adventures with Leonard Bernstein, Marian Anderson, Benny Goodman. Mstislav Rostropovich, Sergiu Celibidache, Cab Calloway, Leontyne Price, Nadia Boulanger, Carl Sagan, Justice Harry Blackmun, and many others.
From his summers playing dance band in the Catskills to the PBS series about music for children, Music Is…, Sidlin tells the stories that shaped him in his understanding of what it is to serve music. The story he brought to light about Nazi prisoners who performed the Verdi Requiem as an act of hope and resistance at the Terezín ghetto concentration camp illuminates the power of music and inspired the Emmy-nominated Defiant Requiem film. Sidlin has been called “a cross between Lenny and Leno,” which he proves by suffering equally while conducting Mahler and enduring the Baltimore Orioles in extra innings.