Venetian Republic: Recipes from the Veneto, Adriatic Croatia, and the Greek islands (Hardcover) 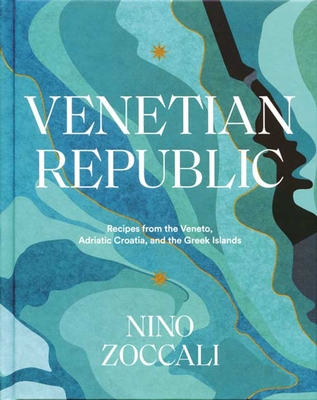 Venetian Republic: Recipes from the Veneto, Adriatic Croatia, and the Greek islands (Hardcover)

PART CULINARY JOURNEY, PART COOKBOOK THIS GORGEOUS COOKBOOK IS INFORMED BY THE CULTURAL HERITAGE OF ITALIAN CHEF NINO ZOCCALI AND HIS GREEK WIFE.

These are recipes steeped in history; dishes from the days when Venice was a world power. How did this small city state rule the waters of the Mediterranean, enjoying unrivaled wealth and prestige? How could this serene, safe-haven city of canals come to play a defining role in shaping the cuisine, culture, and architecture of her Mediterranean neighbors? Yet, for a thousand years, the ships and merchants of the Republic dominated salt, silk, and spice trade routes.

To tell this story, respected writer and restaurateur Nino Zoccali focuses on the four key regions that geographically encapsulate the Venetian Republic, each of which has its own distinct cuisine: Venice and its lagoon islands; the Veneto, of which Venice is the capital; the Croatian coast and the Greek Islands formerly under Venetian rule. The 80 dishes he has selected all have strong traditional Venetian roots or influence, celebrating ingredients and techniques that show how, to this day, food in this magnificent region continues to be influenced by neighboring cultures.

Stunning food and location photography from around Venice, the Dalmatian Coast, and Greek Islands make this cookbook a must-have for foodies and lovers of Mediterranean cuisine.
Nino Zoccali is an Italian chef, restaurateur, and the author of Pasta Artigiana. His obsession with the floating city began when, at 21, he visited Venice for the first time. A skilled Italian chef whose restaurants are among the most authentic and highest-rated Italian diners in Australia, Nino is also an olive oil expert. He is a founding member of the Council of Italian Restaurants and executive chef and proprietor of The Restaurant Pendolino, La Rosa the Strand, and the new restaurant Venetian Republic.
"Italo-Australian restaurateur Zoccali (Pasta Artigiana) enticingly explores the rich culinary history of the 118 islands that make up Venice in this enticing and informative collection of recipes. First settled in 421 A.D. by barbarians, Zoccali explains, Venice morphed into a republic that served through the 18th century as a key trade hub. He divides the book into four sections: the city of Venice; the Veneto region of Italy where Venice is located, the coast of Croatia (a "maritime superhighway??) across the Adriatic Sea, and the Greek islands that were once under Venetian control. Each has its own introduction and is then broken down into starters, first courses, main courses, and desserts. There are similar ingredients throughout, which can sometimes lead to repetition in discussing similar dishes, such as squid-ink pasta with clams and baby artichokes from Venice and squid-ink risotto from Croatia, or pastissada in the Veneto (traditionally made with horse meat but here with beef), Greek pastitsada with chicken, and the pasticada of Croatia. Desserts are abundant, including such appealing treats as a spiral maraschino liqueur cake from the island of Rab and Greek zabaglione, made with Mavrodaphne rather than Marsala. Italophiles will delight in this informed culinary history."