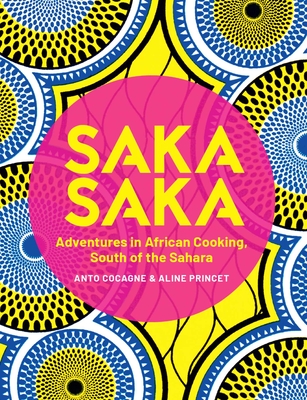 
In Stock—Click for Locations
Chef Anto Cocagne and Photographer Aline Princet take us on a unique food journey and introduce us to the best recipes from Gabon, Senegal, Ivory Coast, Cameroon, Congo, and Ethiopia.

Chef Anto Cocagne and Photographer Aline Princet take us on a unique food journey and introduce us to the best recipes from Gabon, Senegal, Ivory Coast, Cameroon, Congo, and Ethiopia. We will discover the main characteristics of these cuisines, the specialties of each region, the produce, the ideal pantry, the basics, as well as mouthwatering recipes for appetizers, main courses, side dishes, street food, desserts, and drinks.

And since no one evokes a cuisine better than its daughters and sons, we meet African musicians, writers, artists, and creatives who tell stories about their favorite dishes, their family cooking memories, and what these recipes represent for them today.

With stunning food and landscape photography, complemented by beautiful and colorful design, this book is an ode to conviviality, generosity, and positivity. It is a love letter to Africa.
Anto Cocagne, known as Chef Anto, is a Gabonese woman chef who studied culinary arts in France and the US before starting her career as a chef and consultant on African cuisines in Paris. She is the artistic director of Afro Cooking magazine, president of the “We Eat Africa” food festival, and star of the African TV series Rendez-vous avec Le Chef Anto. Her ambition is to popularize African cooking throughout the world.
“Chef Cocagne celebrates ‘the tastes of Sub-Saharan Africa’ in this vibrant [debut] ... In an appealing introduction, she focuses on the region’s history … the information is fascinating. Cocagne covers everything from eating with one’s hands to the absence of frozen food in Africa. Most recipes offer helpful substitutions … The range of cuisines is vast: Ravioli are filled with smoked mackerel and amaranth leaves; a chapter on street food includes fried dumplings and grilled sea bream; and desserts encompass crème brûlée with baobab powder, and mbouraké made by pounding stale bread, sugar, and evaporated milk. Meanwhile, interviews with Sub-Saharan African personalities—such as radio host Soro Solo and designer Aïssé N’Diaye—fold in enlivening cultural tidbits … making it an important entry in the growing number of books about African cuisines.”
— Publishers Weekly

“In Saka Saka, Gabonese and French chef Anto Cocagne celebrates sub-Saharan African cuisine. The invigorating recipes [...] spotlight fresh, nourishing staples with creative flourishes [...] It details foods that are pertinent to both, with a helpful pantry list, and dispels misconceptions about African food being too oily or spicy, encouraging everyone to explore its bold tastes [...] Saka Saka is a congenial, welcoming cookbook that celebrates Africa’s culinary profile with tantalizing dishes and eye-catching photographs.”
— Foreword Reviews, Starred Review

“[A]n adventure through sub-Saharan Africa. Named after a cassava leaf dish, this book combines recipes, portraits, and interviews that introduce African cuisine to the global consumer. Appealing dishes include everything from sides and appetizers to street food and desserts, all showcasing the beauty and art of food from Africa and the connection people have to it. Cocagne encourages readers to revise the misconceptions that food from Africa is too oily, too spicy, or too rich: in reality it is healthy and diverse … With all the love that the continent has to offer this book is a must for cooking collections.”
— Booklist, Starred Review

“[A] snappy book … if you’re looking for dishes that push the boundaries of your palate, Saka Saka has you covered … For the curious American cook who wants more than weeknight dinner hacks, this engrossing book will point in a new direction, whether you head for the thiep bou dien (grouper, cassava, pumpkin and ‘dried fish and shell’) or a slightly more familiar black-eyed-pea and beet hummus.”
— The New York Times, "Eight Dazzling Cookbooks"