How to Build a Human: In Seven Evolutionary Steps (Hardcover) 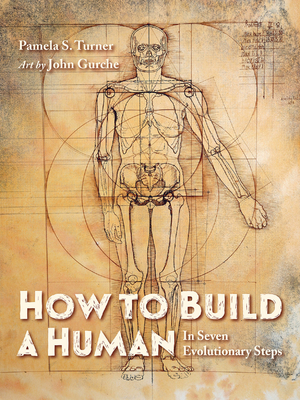 How to Build a Human: In Seven Evolutionary Steps (Hardcover)


On Our Shelves Now at:
The epic story of our evolution in seven big steps!

How did we become who we are? With trademark wit, acclaimed science writer Pamela S. Turner breaks down human evolution into the seven most important steps leading to Homo sapiens. How, when, and why did we:

This fascinating, wickedly funny account of our evolutionary journey turns science into an irresistible story. Vetted by experts at the Smithsonian's Human Origins Program, the book also features incredibly detailed portraits by celebrated paleo-artist John Gurche that bring our early ancestors to life.
Pamela S. Turner has a master's degree in public health from the University of California, Berkeley, and an abiding fascination with science, animals, and evolution. She is the author of several award-winning books for young readers, including Samurai Rising, a YALSA Excellence in Nonfiction Award finalist, and Crow Smarts, winner of the AAAS/Subaru SB&F Prize for Excellence in Science Books.

John Gurche is one of the most respected paleo-artists in the field. His works have appeared in National Geographic and Scientific American and at the American Museum of Natural History, the Field Museum of Natural History, and the Smithsonian Institution. www.gurche.com
♦ "Evolution is a journey, not a destination." The paths and branches of human evolution, from our primate ancestors to Homo sapiens, are thoroughly covered over seven chapters (with titles like "We Get Swelled Heads" and "We Invent Barbecue"). The book shows how physical traits, social behaviors, intelligence and empathy, and hte ability to teach and talk afforded advantages to various hominid species. Turner is a consummate storyteller: her steady pace through millions of years of the human evolutionary line is buoyed by an amused stance, joke-filled footnotes, well-timed shifts into second person, and modern-day analogies attuned to a middle-grade audience. At the same time, she is meticulous in emphasizing the main underlying concepts of evolutionary science: her terms are precise, her representations of scientific knowledge clearly differentiate between hypothesis and established fact, and she confronts minsconceptions head on (see especially a powerful statement about the unscientific construct of race: "race is a cultural construct, not a biological reality"). The main text includes numerous diagrams and maps; photographs of landscapes, fossils, artifacts, and modern animals; and artisic, and modern animals; and artistic interpretations of long-extinct species. It's followed by another fifty pages of notes and resources, timelines, and a glossary.
—The Horn Book, starred review

♦ A probing look into what fossil evidence and other scientific discoveries tell us about our hominid predecessors. Turner kicks off this overview of human evolutionary history with an amusing quip: “If evolution had a motto it would be Yeah. Good enough.” She then goes on to detail seven watershed moments, beginning with “Step One: We Stand Up.” Also covered are: the emergence of toolmaking; the development of larger and more complex brains; the migration of Homo erectus out of Africa; the shift from raw to cooked foods; the evolution of human language; and the advent of storytelling. Using a disarming narrative nonfiction style, the text clearly explains the significance of each anatomical or behavioral change and paints a fascinating picture of life on Earth during geological eras when big predators like Genyornis newtoni, the “Demon Ducks of Doom,” roamed the planet. Turner also presents scientifically grounded theories for why other ancient species of hominids died out. Gurche fleshes out the fossil record with uncommonly lifelike sketches and paintings of hominid faces and full-body figures in discreet poses. Also dispersed throughout the book are thought-provoking color photos of ancient human artifacts. Of particular note is a goose bumps–inducing gallery of prehistoric handprints on cave walls around the world, an image that powerfully brings vanished species into the human fold. The copious backmatter includes a dense, scholarly bibliography; notes on the “myth” of racial, or even species “purity”; and a brief run-through of forces other than natural selection that drive evolution.
Glints of fun light up a rock-solid dig into our Stone Age ancestry.
—Kirkus Reviews, starred review

♦ This fascinating, inviting, and engagingly written volume is ideal for report-writing tweens and teens and those interested in biology and history. It will also find a happy audience in parents who are stuck on younger children’s questions about how ancient sea creatures abandoned the ocean and became . . . us. Chapters discuss the major steps in development that made modern humans, illuminating how and why each happened—how we learned to walk upright, use fire, talk, tell stories, and more. Every page includes some tidbit that will be new to nonexpert readers, such as why evolution caused people on the Indonesian island of Flores to be small but Flores lizards to be extra large; what color a polar bear–grizzly bear hybrid is; how walking upright helps keep us cool; what percentage of humans have no Neanderthal genes (spoiler: it’s zero!). Given that the peoples chronicled here left no written records, Turner gives a remarkable amount of information on them, making clear when scientists have hard facts and where they employ a certain degree of speculation. Throughout, Gurche’s sepia-toned likenesses of other Hominids and color photos of ancient artifacts enliven the already lively text. Extensive back matter—in-depth notes, bibliography, and index—add to the value. A must for science shelves.
—Booklist, starred review

♦ This entertaining and informative look at the history of human evolution follows our hominid predecessors throughout history. Chapters detail major milestones in evolution, including how our ancestors learned to walk, use fire, and talk to one another. The tone is factual and conversational, and humorous footnotes will keep middle grade readers engaged. Turner does more than simply state the facts, speaking to the historical significance of each. The ability to convey detailed and well-researched information in a riveting narrative style is the greatest strength of this title. Color photos and sepia-toned illustrations add context and will engage visual learners. The extensive back matter includes notes, glossary, further reading, a time line, and bibliography. The author’s note addresses the exclusion of a discussion of race in the main text. The final chapter concludes with a reminder that together we can problem solve to make a difference, just as we have done throughout history—a message that will resonate with many younger readers.
VERDICT: This well-researched account of human evolution is a first purchase for library collections.
—School Library Journal, starred review