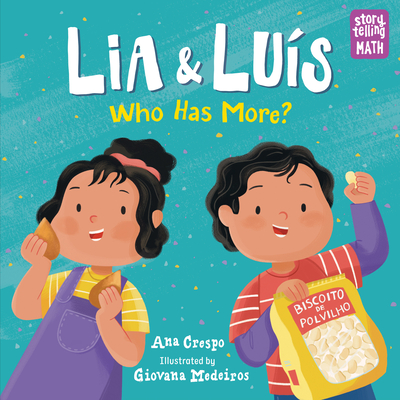 
In Stock—Click for Locations
Celebrate diversity, math, and the power of storytelling!

Twins Lia and Luís argue over who has more of their favorite snacks. Can the siblings use math--and a little sharing--to pick the winner? A playful exploration of measurement, counting, and estimation, featuring Brazilian American characters and a glossary of Brazilian Portuguese words.

Storytelling Math celebrates children using math in their daily adventures as they play, build, and discover the world around them. Joyful stories and hands-on activities make it easy for kids and their grown-ups to explore everyday math together. Developed in collaboration with math experts at STEM education nonprofit TERC, under a grant from the Heising-Simons Foundation.
Originally from Brazil, Ana Crespo moved to the United States to pursue a master of education. She fell in love with children's books when she began reading them to her daughter. But she wanted to see books by Brazilian authors, featuring Brazilian characters! After her son was born, she decided to write her own stories. Ana is the author of The Sock Thief: A Soccer Story, which won an International Latino Book Award, and the My Emotions & Me series.

Originally from Brazil, Giovana Medeiros is now a freelance illustrator based in Lisbon, Portugal. She is the illustrator of Running on Sunshine, In the Garden, and several other children's books from publishers around the world.
A classic sibling debate sets the stage for this effective, child-led exploration of measurement methods. After Lia and Luís visit their family’s store to get their favorite Brazilian snacks, they wonder: is Luís’s one bag of tapioca biscuits “more” than Lia’s two chicken croquettes? In text sprinkled with Portuguese words (a glossary with a pronunciation guide is included at the end), the two children go back and forth, counting, comparing, and measuring: “She has two croquettes. Luís has only one bag of biscuits. Maybe Lia does have more.// Or maybe not... Luís has... 98, 99, 100 biscuits.” Eventually, Lia discovers who has more by weight and finds a way for each child to have an equal amount. Medeiros’s cheery, colorful digital illustrations capture the children’s frustration, concentration, and joy. Includes four additional adult-led activities to encourage children to think more about measurement and comparison.
—Publishers Weekly