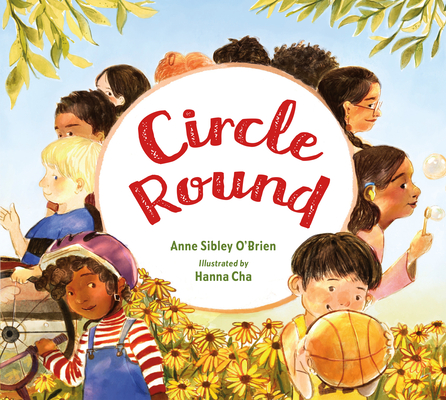 
In Stock—Click for Locations
A circle of children ask others to join in their play and soon find out that inclusion is irresistible!

From the author of I'm New Here and Someone New comes an inspiring new story of inclusion. One child in a park waves over a second child. Two children then wave over a third. Counting from one to ten, a growing circle of children see new faces outside the group and invite them over. Children of different abilities, ages, genders, and races demonstrate how easy it can be to expand your group, extend yourself, and welcome new friends.
Anne Sibley O'Brien's passion for multiracial, multicultural, and global subjects grew out of her experience of being raised bilingual and bicultural in South Korea. She is the author and illustrator of many books for children, including Someone New, I'm New Here, A Path of Stars, After Gandhi, and In the Shadow of the Sun.

Hanna Cha spent her childhood in both Korea and America. She graduated from Rhode Island School of Design in 2017 and currently lives in Boston. www.hannacha.com
A cogent message of love and acceptance is portrayed through the spare language and delicate watercolor illustrations of this diverse picture book. Children playing in a park gradually join together to form a single playful “circle,” the backgrounds a muted sepia around each new addition—until they join the fun. Body diversity—one boy arrives with a service dog; a little girl has hearing aids—and multiple ethnicities are represented without being remarked upon, making this a subtle, unifying text.
—ForeWord

This warm-hearted playground-set concept book focuses on circles and on counting from one to ten. "Once circle. . . bounces! Two circles. . . roll!" Warm-toned, digitally colored ink illustrations depict a child bouncing a basketball and another cycling up on a two-wheeler. More friends appear, each shown with a circular or spherical item. Some of these items are toted (hula hoops, flying discs), some are built into the playscape (climbing rings, sprinkler heads), and all are intended for cooperative enjoyment. After we get to ten circles—in the form of festively decorated cookies—the count returns to the beginning. The children join hands as "one circle gathers. One circle opens. One circle grows. Circle Round." The message of inclusion, underscored by the illustrations casual diversity in characters' skin tones, ethnicities, genders, and abilities, is clear for very young children—all of whom would likely be welcomed enthusiastically into this circle of friends.
—The Horn Book

One basketball, two bicycle wheels, three hula hoops, four frisbees, and other circular objects up to 10 provide children of varying skin tones, genders, and abilities the chance to interact through play in this lively counting book. Emphasizing circular objects’ ability to connect individuals, Cha’s digitally colored ink illustrations juxtapose smudgy, sepia-toned scenes of solo kids on a playground with chromatic depictions of a growing group’s energetic exploits. On one page, a light-skinned child using a wheelchair sits alone on a splash pad among six fountain discs—a scene that gains full color when more children join in the fun. Past 10, a circle of smiling children “gathers,” “opens,” and “grows,” simply showcasing the shape’s—and children’s—ability to expand and include.
—Publishers Weekly


A circle grows larger and more inclusive. Children—diverse in gender, skin tone, ethnicity, hairstyle and color, and physical ability—meet while playing, initially separately, in the park. What unites them is engagement with round things: toys (ball, balloons, Frisbees, hula hoops); playground equipment; wheeled items (bike, wheelchair); and other circular objects (bubbles, cookies). The group expands in size and fun. After the kids clasp hands to form a literal circle, one child observes that a newcomer (with a dog) has just arrived. Guess who completes the friendship ring? This ode to kindness and a welcoming spirit is cheerful and textually minimal, focusing on number words one to 10, active verbs, and the words circle or circles in boldfaced larger type. Lively ink illustrations feature smiling children enjoying one another’s company and also, notably, being mutually helpful. One child uses a wheelchair and is fairly actively engaged in play; another wears hearing aids; a third, eyeglasses. Unfortunately, some illustrations suffer from a lack of clarity. On the first spread, captioned “One circle,” for instance, the verso shows a basketball, the recto, a bike. Kids would likely describe the bike’s wheels as round, therefore rightly claiming the spread includes three circles; the subsequent spread features the basketball and bike with the caption “Two circles”—but, arguably, again three circles. And so on. These interpretations may lead to conversation or frustration.
Though well meaning, this circle is a bit broken.
—Kirkus Reviews