The History of Cycling in Fifty Bikes: From the Velocipede to the Pinarello: The Bicycles that Have Shaped the World (Hardcover) 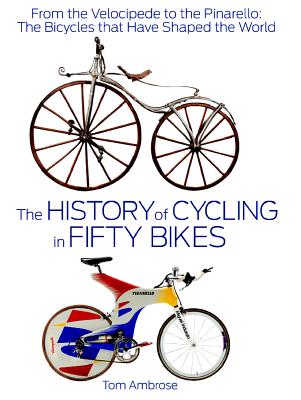 The History of Cycling in Fifty Bikes: From the Velocipede to the Pinarello: The Bicycles that Have Shaped the World (Hardcover)


Special Order—Subject to Availability
The invention of the bicycle changed history by democratizing travel for the first time. The common man—and importantly the common woman—could now afford to travel at reasonable speed without the need of a horse. Instead of walking just 10 miles a day on foot, a healthy individual could now ride up to 80 miles on a cycle at a relatively modest cost.

Today, despite the prevalence of the car, the bicycle is as important as ever. More cycles appear on city streets each year, offering healthy, pollution-free transport. Commuters cycle to work through congested traffic, urban hire-bike schemes are increasingly common, and the sports of road and track racing continue to gain in popularity.

For an invention with a history of just 200 years, the simple bicycle has changed the world in many ways. From the Velocipede to the Pinarello, The History of Cycling in Fifty Bikes by Tom Ambrose relates this history by telling the stories of 50 iconic machines that have shaped the world.
TOM AMBROSE studied history at Trinity College, Dublin, and gained a postgraduate degree at University College, London. Initially working in advertising, Tom switched to producing and directing television documentaries before becoming a full-time writer. He lives in the UK.
“It's a volume that racers, hipsters on fixies, families with cargo bikes and occasional cyclists in their seemingly endless contemporary varieties will want to add to their collection.” —BookPage
For This Book...
Staff Pick