The War on Guns: Arming Yourself Against Gun Control Lies (Hardcover) 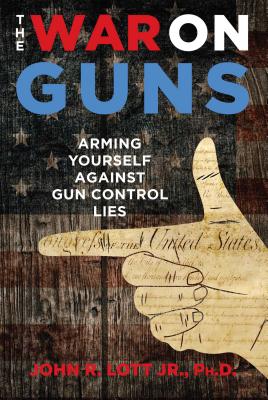 The War on Guns: Arming Yourself Against Gun Control Lies (Hardcover)


Special Order—Subject to Availability
When it comes to the gun control debate, there are two kinds of data: data that's accurate, and data that left-wing billionaires, liberal politicians, and media want you to believe is accurate. In The War on Guns: Arming Yourself Against Gun Control Lies (Regnery Publishing; $27.99; 978-1621575801), nationally-renowned economist John R. Lott, Jr. turns a skeptical eye to well-funded anti-gun studies and stories that perpetuate false statistics to frighten Americans into giving up their guns.

In this, his latest and most important book, The War on Guns, Lott offers the most thorough debunking yet of the so-called “facts,” “data,” and “arguments” of anti-gun advocates, exposing how they have repeatedly twisted or ignored the real evidence, the evidence that of course refutes them on every point.

In The War on Guns, you’ll learn:

John R. Lott, Jr., Ph.D, called by Newsweek the “Gun Crowd’s Guru,” is an author, lecturer, and nationally-famous economist. Nobel laureate Milton Friedman said: “John Lott has few equals as a perceptive analyst of controversial public policy issues.” He has held research and/or teaching positions at the University of Chicago, Yale University, Stanford, UCLA, Wharton, and Rice, and was the chief economist at the United States Sentencing Commission during 1988 and 1989. A FoxNews.com columnist, Lott is the author of eight previous books, including More Guns, Less Crime and Freedomnomics. He received his Ph.D. in economics from UCLA in 1984.

Lott is also the founder of the popular Crime Prevention Research Center (CPRC)—a research and education organization dedicated to conducting academic quality research on the relationship between laws regulating the ownership or use of guns, crime, and public safety; educating the public on the results of such research; and supporting other organizations, projects, and initiatives that are organized and operated for similar purposes.