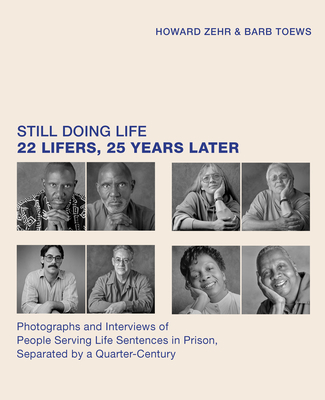 Side-by-side, time-lapse photos and interviews, separated by twenty-five years, of people serving life sentences in prison, by the bestselling author of The Little Book of Restorative Justice

"Shows the remarkable resilience of people sentenced to die in prison and raises profound questions about a system of punishment that has no means of recognizing the potential of people to change." --Marc Mauer, senior adviser, The Sentencing Project, and co-author (with Ashley Nellis) of The Meaning of Life

"Life without parole is a death sentence without an execution date." --Aaron Fox (lifer) from Still Doing Life

In 1996, Howard Zehr, a restorative justice activist and photographer, published Doing Life, a book of photo portraits of individuals serving life sentences without the possibility of parole in Pennsylvania prisons. Twenty-five years later, Zehr revisited many of the same individuals and photographed them in the same poses. In Still Doing Life, Zehr and co-author Barb Toews present the two photos of each individual side by side, along with interviews conducted at the two different photo sessions, creating a deeply moving of people who, for the past quarter century, have been trying to live meaningful lives while facing the likelihood that they will never be free.

In the tradition of other compelling photo books including Milton Rogovin's Triptychs and Nicholas Nixon's The Brown Sisters, Still Doing Life offers a riveting longitudinal look at a group of people over an extended period of time--in this case with complex and problematic implications for the American criminal justice system. Each night in the United States, more than 200,000 men and women incarcerated in state and federal prisons will go to sleep facing the reality that they may die without ever returning home. There could be no more compelling book to challenge readers to think seriously about the consequences of life sentences.