High Noon: The Hollywood Blacklist and the Making of an American Classic (Hardcover) 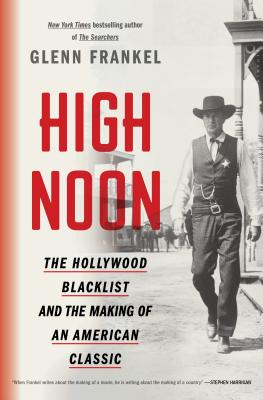 High Noon: The Hollywood Blacklist and the Making of an American Classic (Hardcover)

From the New York Times-bestselling author of The Searchers, the revelatory story behind the classic movie High Noon and the toxic political climate in which it was created.

It's one of the most revered movies of Hollywood's golden era. Starring screen legend Gary Cooper and Grace Kelly in her first significant film role, High Noon was shot on a lean budget over just thirty-two days but achieved instant box-office and critical success. It won four Academy Awards in 1953, including a best actor win for Cooper. And it became a cultural touchstone, often cited by politicians as a favorite film, celebrating moral fortitude.

Yet what has been often overlooked is that High Noon was made during the height of the Hollywood blacklist, a time of political inquisition and personal betrayal. In the middle of the film shoot, screenwriter Carl Foreman was forced to testify before the House Committee on Un-American Activities about his former membership in the Communist Party. Refusing to name names, he was eventually blacklisted and fled the United States. (His co-authored screenplay for another classic, The Bridge on the River Kwai, went uncredited in 1957.) Examined in light of Foreman's testimony, High Noon's emphasis on courage and loyalty takes on deeper meaning and importance.

In this book, Pulitzer Prize-winning journalist Glenn Frankel tells the story of the making of a great American Western, exploring how Carl Foreman's concept of High Noon evolved from idea to first draft to final script, taking on allegorical weight. Both the classic film and its turbulent political times emerge newly illuminated.

Glenn Frankel worked for many years at The Washington Post, winning a Pulitzer Prize in 1989. He has taught journalism at Stanford University and the University of Texas at Austin, where he directed the School of Journalism. He has won the National Jewish Book Award, was a finalist for the Los Angeles Times Book Prize, and is a Motion Picture Academy Film Scholar. He is the bestselling author of The Searchers and High Noon, and lives in Arlington, Virginia.

"Glenn Frankel comes to his subject with a widely praised book about John Ford's 'The Searchers' and an impressive resume in journalism, including a Pulitzer Prize. Although much of Frankel’s material is familiar, the blacklist is a gift that keeps on giving. . . Frankel narrates this story well. He has a sure ear for the telling anecdote, and a good eye for detail. "- The New York Times Book Review

"Though Frankel began this sumptuous history long before the latest election, he ends up reminding us that 2016 was far from the first time that politicians trafficked in lies and fear, and showing us how, nonetheless, people of integrity came together to do exemplary work." - Washington Post

"The movie 'High Noon,' great in itself, is all the greater for the backstory Mr. Frankel tells." - The Wall Street Journal

"Mixing elements of biography, social history and film analysis, author Glenn Frankel uncovers drama and tragedy not usually found in discussions of moviemaking. His detailed narrative is a primer for those who don't understand how the blacklist era endangered free speech and other constitutional values. "- Associated Press

"Frankel reviews the now familiar history of the blacklist with grace and accuracy; his descriptions of witness testimony are particularly vivid. . . . Fascinating." - The Los Angeles Times

"Frankel paints a devastating picture of a powerful force crumbling under oppression--a cautionary tale in borrowed cowboy hats. . . . High Noon is a sharp social history that reminds us just how common for a broken system to abuse its power and cause deep human damage--the worst is coming, any second--but also that a little cynicism can be useful. Kane defends a worthless city; Kane wins. There are no clean endings, except in the movies." - NPR.org

"[A] compelling new book. . . . The real strength of Frankel's account lies in its illustration, in many shades of gray, of the Hollywood blacklist and what it did, in practical terms, as it ruined or derailed many, many careers. . . . The Red Scare Hollywood era is familiar nonfiction territory, but Frankel makes it vital and gets down to the roots.” - Chicago Tribune

"Film historian Glenn Frankel profiles the times, the movie and its message in his fascinating and revealing new book High Noon: The Hollywood Blacklist and the Making of an American Classic . . . Frankel--who previously uncovered the backstory of the classic John Wayne movie 'The Searchers'--says the blacklist marked a uniquely grim time in American history, one with special resonance today." - Christian Science Monitor

"The blacklist has provided grist for many books, including Victor Navasky's seminal study Naming Names. But Frankel's book feels fresh nonetheless. . . . He brings out the drama and the no-win situation of everyone who was called before HUAC: throw your friends and colleagues under the bus by naming them as former or current Communists or sympathizers, or watch your life and career go up in flames." - Dallas Morning News

"Film buffs and history aficionados will be delighted and riveted by Glenn Frankel's insightful and intimate look at the making of the classic 1952 western High Noon. . . Frankel's saga presents a gripping and coherent picture of the corrupt politics, paranoia and fear mongering that drove Hollywood studio heads to capitulate to anti-Communist witch-hunters." - Shelf Awareness

"Not far removed from a James Ellroy novel. The 1950s film industry portrayed in High Noon is, like Ellroy's Los Angeles, stocked with hard-core commies, idealistic fellow travelers, paranoid Red-baiters, union busters, corrupt congressmen, power-hungry gossip columnists, secretive FBI agents and their snitches, philandering actors and eager starlets. But far from being a Hollywood Babylon of the Red Scare, Frankel's book is a detailed investigation of the way anti-communist persecution poisoned the atmosphere around one film, which succeeded nonetheless, and damaged the lives of the people who made it." - Bookforum

"Besides the macro picture of Hollywood in its darkest era, Frankel is excellent at capturing the micro aspects as well, fascinatingly weaving in multiple and competing accounts of how the film was pieced together in the editing room. . . A comprehensive guide to both a classic film and the era that created it." - Kirkus Reviews

"An absorbing account of how a routine 1952 western starring a has-been and an unknown became an unexpected classic. . . this story of politics, art, loyalty and conscience is more relevant than ever. And a nice bonus: Although it may impart a civics lesson, it doesn't read like one. "- Minneapolis Star Tribune

"Frankel draws on a plethora of sources to craft a tale that, as a thriller, rivals "High Noon" itself." - The Houston Chronicle

"This may be one of the most accessible books ever written concerning the effects of HUAC on Hollywood, as Frankel's decision to blend these two aspects of Hollywood history, and his innate skill as a journalist, has produced a highly readable and fascinating look at a period that is less widely known than one might imagine. VERDICT: Anyone interested in film and/or politics will enjoy and learn from this book." - Library Journal

"So much has been written about the blacklist's perpetrators and victims that you might be forgiven for thinking you know all there is worth knowing, but Frankel offers new details and fresh insights. His portrait of Gary Cooper's life and career is equally incisive . . . It will almost surely stand as the definitive document about this landmark movie. I can't wait to see what subject this skilled journalist will tackle next." - Leonard Maltin

"Glenn Frankel has endowed the term ‘film historian’ with a sweeping new dimension. High Noon is full of scholarly insight, compelling history and wonderfully dishy moments, but like his previous book on The Searchers it is also an American chronicle of real consequence. When Frankel writes about the making of a movie he is writing about the making of a country." - Stephen Harrigan, author of THE GATES OF THE ALAMO and A FRIEND OF MR. LINCOLN

"Glenn Frankel's High Noon isn't just everything you always wanted to know about an enduring classic; it's a deeply insightful portrait of the forces in postwar America and in blacklist-era Hollywood that made the film such a powerful product of such a troubled moment." - Mark Harris, author of PICTURES AT A REVOLUTION and FIVE CAME BACK

"Glenn Frankel's High Noon is three splendid books in one: a moment by moment account of the making of the classic western, a history of the Hollywood blacklist with much new material based on primary research, and, in the rise of Stanley Kramer Productions, the story of the independent producers who gradually supplanted conventional studio production. Even if we know how each story ends, it's never less than a continuously fascinating read." - Scott Eyman, author of JOHN WAYNE: THE LIFE AND LEGEND