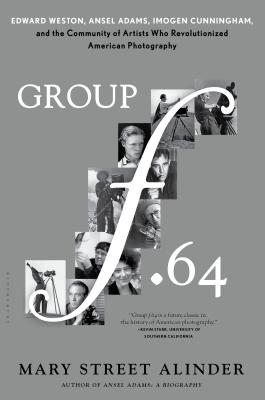 Group f.64 is perhaps the most famous movement in the history of photography, counting among its members Ansel Adams, Imogen Cunningham, Dorothea Lange, Willard Van Dyke, and Edward Weston. Revolutionary in its day, Group f.64 was one of the first modern art movements equally defined by women and men working as equals. From the San Francisco Bay Area, its influence extended internationally, contributing significantly to the recognition of photography as a fine art.

The group was comprised of strongly individualist artists, brought together by a common philosophy and held together in a tangle of dynamic relationships. They shared a conviction that photography must emphasize its unique capabilities--those that distinguished it from other arts--in order to establish the medium's identity. Their name, f.64, they took from a very small lens aperture used with their large-format cameras, a pinprick that allowed them to capture the greatest possible depth of field in their lustrous, sharply detailed prints. In today's digital world, these straight photography champions are increasingly revered. A former assistant to Ansel Adams, Mary Street Alinder knew most of the artists featured in this first group biography. Just as important, she understands the art. Featuring close to one hundred photographs by and of its members, Group f.64 details a transformative period in art history with narrative brilliance.
Mary Street Alinder is an independent scholar specializing in twentieth-century photography. From 1979 until his death, Alinder was chief assistant to Ansel Adams. She worked closely with him on his bestselling autobiography, which she completed posthumously. She also coedited a volume of his letters and published the definitive biography. Alinder has curated exhibitions worldwide, including the 1987 Adams blockbuster at the de Young Museum and a 2002 Adams Centennial exhibition, and has lectured internationally. She lives in Northern California.