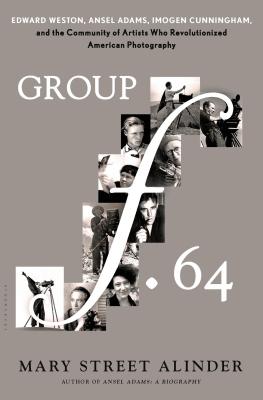 Group f.64 is perhaps the most famous movement in the history of photography, counting among its members Ansel Adams, Imogen Cunningham, Dorothea Lange, Willard Van Dyke, and Edward Weston. Revolutionary in their day, Group f.64 was one of the first modern art movements equally defined by women. From the San Francisco Bay Area, its influence extended internationally, contributing significantly to the recognition of photography as a fine art.

The group-first identified as such in a 1932 exhibition-was comprised of strongly individualist artists, brought together by a common philosophy, and held together in a tangle of dynamic relationships. They shared a conviction that photography must emphasize its unique capabilities-those that distinguished it from other arts-in order to establish the medium's identity. Their name, f.64, they took from a very small lens aperture used with their large format cameras, a pinprick that allowed them to capture the greatest possible depth of field in their lustrous, sharply detailed prints. In today's digital world, these “straight” photography champions are increasingly revered.

Mary Alinder is uniquely positioned to write this first group biography. A former assistant to Ansel Adams, she knew most of the artists featured. Just as importantly, she understands the art. Featuring fifty photographs by and of its members, Group f.64 details a transformative period in art with narrative flair.

Mary Street Alinder is an independent scholar specializing in twentieth-century photography. From 1979 until his death, Alinder was chief assistant to Ansel Adams. She worked closely with him on his bestselling autobiography, which she completed posthumously. She also coedited a volume of his letters and published the definitive biography, recently revised and updated in a new edition. In addition to her writings, Alinder has curated exhibitions worldwide, including the 1987 Adams blockbuster at the de Young Museum and a 2002 Adams Centennial exhibition. Alinder has lectured internationally, from Washington, DC's National Gallery to London's Barbican Centre and China's Shanghai Cultural Center. She lives in Northern California.

“Alinder pulls together a treasury of assiduously assembled facts and her own personal memories, especially of Adams, for whom she worked as chief assistant, later becoming his biographer. Alinder is particularly revelatory in her coverage of tough and wily Cunningham, the lesser-known but no less intriguing trailblazers Willard Van Dyke, Sonya Noskowiak, and Consuelo Kanaga, and the bold museum directors and collectors who supported the group. As she chronicles the photographers' friendships, tempestuous love lives, epic parties, scrambles to survive, passionate manifestos, heated public debates, social and environmental concerns, and hard-won exhibitions, Alinder achieves an f.64 degree of crisp and commanding detail in this landmark group portrait of the visionary photographers who succeeded in 'forever changing our way of seeing.'” —Booklist, starred review

“This lively group biography . . . tells a distinctly West Coast story about an ambitious, broad-minded, and unusually diverse movement . . . Alinder, who studied under Adams and later worked as his assistant, smoothly alternates between many individual careers while still maintaining a cohesive group narrative.” —Publishers Weekly

“In her history of Group f.64 Mary Street Alinder traces the formation and impact of the collective in a colorful and heavily researched account that brings to life the characters and ideas whose impacts on photography today . . . Photographers interested in these individuals, the history of the medium and the cultural and economic milieu that shaped photography in the United States in the 20th century will find much to like in her book.” —Photo District News

“Alinder's sympathetic history captures the excitement and energy of determined artists who invigorated and redefined the art of photography.” —Kirkus Reviews

“A future classic in the history of American photography, here is the gripping story of a group of extraordinarily talented Bay Area photgraphers who created community for themselves in the midst of the Great Depression—and how from that community emerged a body of work stunning to this day in its bold advance of photography as fine art.” —Kevin Starr, University of Southern California

“A fascinating and inspiring narrative, Group f.64 reveals both the personal and professional struggles and triumphs of an extraordinary group of photographers who changed the course of twentieth-century photography. This is a groundbreaking, major work of scholarship.” —Peter C. Bunnell, McAlpin Professor of the History of Photography and Modern Art Emeritus, Princeton University

“A precise, vivid, and highly readable account that marks Group f.64 as one of the most significant episodes of twentieth-century American visual culture.” —Julian Cox, founding curator of photography and chief curator, Fine Arts Museums of San Francisco

“Group f.64 offers a rich tapestry of individuals and institutions, of art and personal politics, of the search for truth, the challenge of change, and maybe even the complex triumph of photographic ideals.” —Roy Flukinger, senior curator, Harry Ransom Center, University of Texas, Austin

“Mary Alinder presents the key figures as distinct and memorable personalities, while rescuing a host of previously marginalized figures from historical obscurity. The result is a wonderfully engaging and enlightening new look at one of the most important movements in modern creative photography.” —Keith F. Davis, senior curator of Photography, Nelson-Atkins Museum of Art