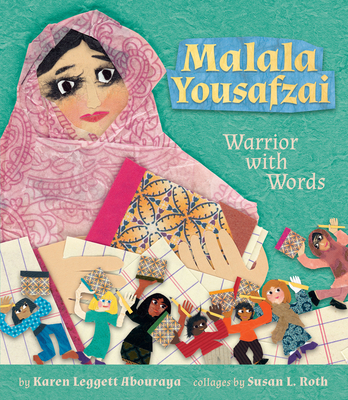 The inspiring true story of Malala Yousafzai, the Pakistani girl who has become an international activist for universal education, with beautiful collage illustrations by award-winning artist Susan L. Roth.

Growing up in the Swat Valley of Pakistan, Malala Yousafzai loved books and school. But in 2009, the Taliban came to power and closed all schools for girls. Malala, just eleven years old, began to speak and blog about the right of all children to receive an education.

Soon fighting broke out and Malala's family fled the Swat Valley. After the fighting ceased, they returned home, and Malala continued to speak out. That's when she was shot by a Taliban gunman, but her life-threatening injury only strengthened Malala's resolve. In 2013, just nine months after being attacked, Malala addressed the United Nations about the right of every child to receive an education, and in 2014, she was awarded the Nobel Peace Prize. At age seventeen, she was the youngest person ever to receive this honor.

This book is more than a biography of a brave, outspoken girl who continues to fight for the millions of children worldwide who are not able to go to school. It is also a testament to the power of education to change the world for girls and boys everywhere.

KAREN LEGGETT ABOURAYA is the author of Hands Around the Library: Protecting Egypt's Treasured Books, which received the Arab American Book Award and a California Reading Association's Eureka! Book Award honor, along with recognition as a Notable Book for a Global Society. About why she wrote this book, Abouraya says, Reading is such a wonderful way to learn about what's important in other people's lives. She and her husband live in Silver Spring, Maryland. You can find out more about her online at childrenslit.com/2014/11/05/karen-leggett-abouraya. Susan L. Roth's vibrant mixed-media collage illustrations have appeared in numerous outstanding picture books, including Parrots Over Puerto Rico, winner of the Robert F. Sibert Informational Book Medal; Prairie Dog Song; The Mangrove Tree; and most recently Every Month Is a New Year and Malala Yousafzai: Warrior with Words. Roth and her husband live in New York. Visit her online at susanlroth.com.