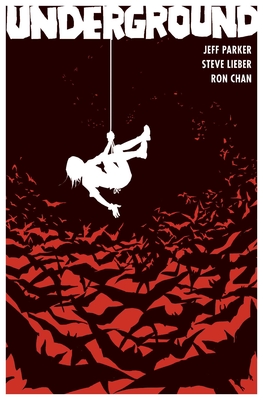 
In Stock—Click for Locations
"A simple story is made interesting by the unusual setting, the characters' specialized knowledge, and a gratifying ending." — Publishers Weekly

Park Ranger and avid caver Wesley Fischer is on a one-woman mission to stop Stillwater Cave from being turned into a tourist trap, but public opinion is not on her side. When violent locals begin blasting in the cave, Wes and a fellow ranger investigate. A confrontation between both parties spirals into a deadly chase, forcing the two rangers to flee deep under the Kentucky mountains. First to escape pursuers, and then the deadliest threat? The cave itself!

Artist Steve Lieber (Superior Foes of Spider-Man, Whiteout) and acclaimed writer Jeff Parker (Agents of Atlas, Exiles) return to the adventure genre with a new thriller that digs deep into the abyss.
Jeff is known in comics as the writer of Agents of Atlas, X-Men First Class, Hulk, Flash Gordon, Batman ’66, Aquaman, Future Quest, Thunderbolts, Justice League United, and James Bond Origin. He’s especially proud of his original graphic novel creations, such as The Interman, Underground, Mysterius The Unfathomable, Bucko, and now Meteor Men.
"A simple story is made interesting by the unusual setting, the characters' specialized knowledge, and a gratifying ending."
— Publishers Weekly