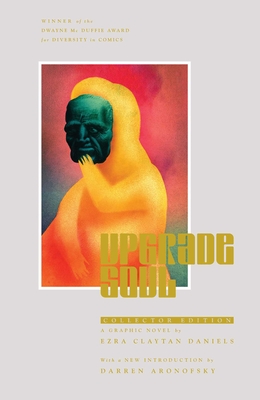 
Not On Our Shelves—Ships in 1-5 Days
“This is science fiction at its best.” — Tor

This new Upgrade Soul Collector's Edition is a beautiful hardcover with a new essay and design files from Ezra, as well as a foreword by Darren Aronofsky, and afterword by Karama Horne.

For their 45th anniversary, Hank and Molly Nonnar decide to undergo an experimental rejuvenation procedure, but their hopes for youth are dashed when the couple is faced with the results: severely disfigured yet intellectually and physically superior duplicates of themselves. Can the original Hank and Molly coexist in the same world as their clones? In Upgrade Soul, McDuffie Award-winning creator Ezra Claytan Daniels asks probing questions about what shapes our identity-Is it the capability of our minds or the physicality of our bodies? Is a newer, better version of yourself still you? This page-turning graphic novel follows the lives of Hank and Molly as they discover the harsh truth that only one version of themselves is fated to survive.
Ezra Claytan Daniels is a multidisciplinary artist and creator of the Eisner, Harvey, and Ignatz Award-nominated graphic novels, Upgrade Soul and BTTM FDRS. Ezra currently resides in Los Angeles, CA, where he writes for film and television.
"A stunning work of feverish imagining."
— io9

“Earth-shattering sci-fi. Upgrade Soul has profound things to say about mortality, aging, identity and the fundamental sense of self. Every choice, every component of Upgrade Soul simply works.”
— Paste

“A skillfully told, beautifully illustrated tale that is all at once a love story; thought-provoking sf; a meditation on aging, identity, and race; as well as a terrifying, visceral thriller.”
— Library Journal [Starred Review]

"Daniels’s prose is haunting and cinematic, and his storytelling structure is magnificent, but his greatest talents lie in his artwork, which uses thin lines and surreal imagination to mix beauty and deformity to a point where the two are indistinguishable from one another."
— Vulture