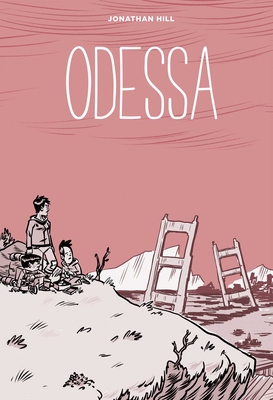 "It’s dark and gritty, yet there are moments of kindness and strength that will keep you thinking about these characters long after you’ve finished the book." — Dav Pilkey, author of the Dog Man series

Three siblings search for their missing mother across a ruined America in this original graphic novel debut from author & artist, Jonathan Hill.

Eight years ago an earthquake—the Big One—hit along the Cascadia fault line, toppling cities and changing landscapes all up and down the west coast of the United States. Life as we know it changed forever. But for Vietnamese-American Virginia Crane, life changed shortly after the earthquake, when her mother left and never came back.

Ginny has gotten used to a life without her mother, helping her father take care of her two younger brothers, Wes and Harry. But when a mysterious package arrives for her eighteenth birthday, her life is shaken up yet again. For the first time, Ginny wants something more than to survive. And it might be a selfish desire, but she's determined to find out what happened to her mother—even if it means leaving her family behind.
Jonathan Hill is an award-winning cartoonist who lives in Portland, OR. His comics and illustrations have been featured in publications by Fantagraphics, Lion Forge, tor.com, Powell's City of Books, The Believer Magazine, and the Society of Illustrators. His first two books, Americus and Wild Weather, were created with writer MK Reed and published by First Second Books. Jonathan also teaches comics at the Pacific Northwest College of Art and serves on the board of directors at Literary Arts. Odessa is the first book he has written and drawn himself.
“Hill’s storytelling and artwork bring to mind the brilliance of writer/cartoonists like Jeff Smith and Kazu Kibuishi.”
— Dav Pilkey, best-selling author of the Dog Man series

"Jonathan Hill's trichromatic illustrations and story, set in the rich, forested Western landscape, is as compelling as it is beautiful."
— Powell's Books (Staff Pick)

"With Odessa, Jonathan Hill has captured everything I love in a single story: old family secrets, smart kids running the show, and a beautifully realized post-apocalyptic landscape. Innovative artwork and gorgeous writing come together to create one of my favorite graphic novels of all time. I dare you to read this and not finish it in one sitting."
— David Arnold, New York Times bestselling author of The Electric Kingdom and Mosquitoland