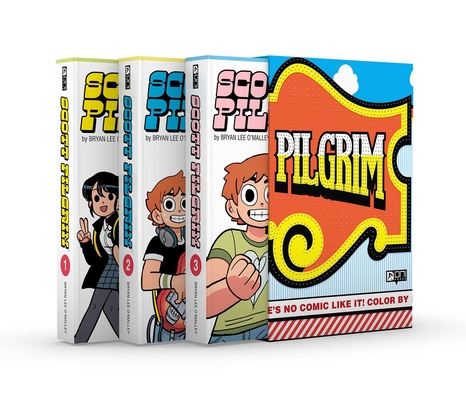 The New York Times bestselling series, and basis for the movie Scott Pilgrim vs. The World, is now available in a new full-color softcover format!

This Color Collection Box Set collects all six volumes of the award-winning series in three massive books that might wreak havoc on your bookshelf. But the memories will be worth it! Laugh as slacker Scott Pilgrim tries and sometimes fails to get his life together and win the heart of the literal girl of his dreams, Ramona Flowers! Cry when things look bleak for our heroes! Make a confused face at the countless Canadian references! (Unless you live in Canada already.) The perfect gift for a Scottoholic—or for anyone discovering the bestselling series for the first time.
Bryan Lee O'Malley is a Canadian cartoonist currently living in Los Angeles. His six-volume Scott Pilgrim series was a New York Times bestseller, an LA Times Book Prize finalist, and won an Eisner Award, two Harvey Awards, a Doug Wright Award, and a Joe Shuster Award. In 2010, Scott Pilgrim was adapted into a critically-acclaimed major motion picture (from Universal) and video game (from Ubisoft). His books (including Lost at Sea, Seconds, and Snotgirl) have been translated into over 20 languages.