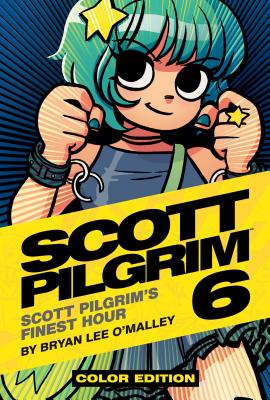 This is book number 6 in the Scott Pilgrim series.

Scott Pilgrim has faced down six of Ramona Flowers's evil exes. But now that the happy couple is no more, was it even worth it? And if Scott and Ramona aren't together, then why do the ominous messages from Gideon Graves keep coming? This the end of the Scott Pilgrim saga like you've never seen it before—in full, glorious color with a bevy of extras! This is truly SCOTT PILGRIM'S FINEST HOUR!
Bryan Lee O'Malley is a Canadian cartoonist best known for the bestselling, award-winning Oni Press series "Scott Pilgrim" (2004-2010). "Scott Pilgrim" was adapted into a critically-acclaimed major motion picture (from Universal) and video game (from Ubisoft) in 2010. O'Malley lives in Los Angeles, where he continues to make comics.