The Tower of the Antilles (Hardcover) 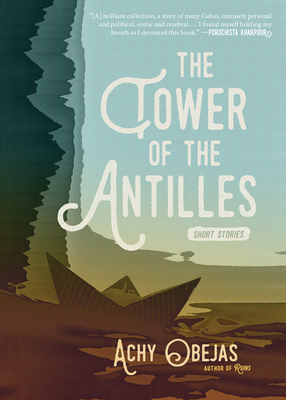 The Tower of the Antilles (Hardcover)

Finalist for the Pen/Faulkner Award for Fiction

One of Electric Literature's Best Short Story Collections of 2017

Questions of personal and national identity percolate through the stories in Obejas's memorable short fiction collection, most of which is set in Cuba, the author's birthplace...These 10 stories show Obejas's talent, illuminating Cuban culture and the innermost lives of her characters.
--Publishers Weekly

By turns searing and subtly magical, the stories in Obejas' vividly imagined collection are propelled by her characters' contradictory feelings about and unnerving experiences in Cuba...For all the human tumult and deftly sketched and reverberating historical and cultural contexts that Obejas incisively creates in these poignant, alarming tales, she also offers lyrical musings on the mysteries of the sea and the vulnerability of islands and the body. Obejas' plots are ambushing, her characters startling, her metaphors fresh, her humor caustic, and her compassion potent in these intricate and haunting stories of displacement, loss, stoicism, and realization.
--Booklist

Obejas's stories demonstrate an acute understanding of being caught between two places and cultures as different as America and Cuba.
--Library Journal

Obejas writes with gentleness, without flashy wording or gimmicks, about people trying to figure out where they belong...The language we use and the stories we tell impact the futures we can imagine, but they are also restricted by what has come before. Obejas's Cuban characters, like most Americans, have limited access to the resources they need. One gets the sense that Obejas, like the Maldivian president, thinks it is time that the world takes these systemic problems on.
--Los Angeles Review of Books

In Superman, several possible story lines emerge about a 1950s Havana sex-show superstar who disappeared as soon as the revolution triumphed. North/South portrays a migrant family trying to cope with separation, lives on different hemispheres, and the eventual disintegration of blood ties. The Cola of Oblivion follows the path of a young woman who returns to Cuba, and who inadvertently uncorks a history of accommodation and betrayal among the family members who stayed behind during the revolution. In the title story, The Tower of the Antilles, an interrogation reveals a series of fantasies about escape and a history of futility.

With language that is both generous and sensual, Obejas writes about existences beset by events beyond individual control, and poignantly captures how history and fate intrude on even the most ordinary of lives.

Achy Obejas is the author of the critically acclaimed novels Ruins, Days of Awe, and three other books of fiction. She edited and translated (into English) the anthology Havana Noir, and has since translated Junot Diaz, Rita Indiana, Wendy Guerra, and many others. In 2014, she was awarded a USA Ford Fellowship for her writing and translation.