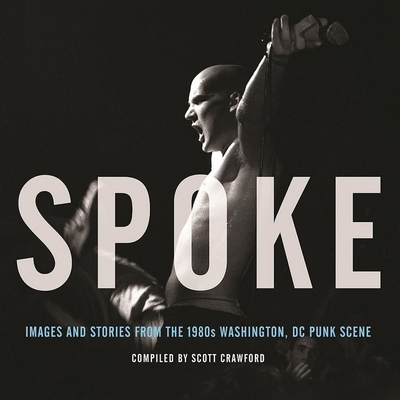 
Special Order—Subject to Availability
The pictures, which include some posed portraits but are mostly concert shots, are the chief attraction. They freeze moments of adolescent release, vein-bulging intensity and sweaty communion that fuses performer and audience...Vivid and evocative.
--Washington Post Scott Crawford, the man behind the acclaimed documentary Salad Days, has given us another taste of the best-kept secret of 80s in his new book Spoke: Washington DC's hardcore punk scene.
--Dazed With music by Minor Threat, Void, Rites of Spring, Government Issue, and many others propelling the story of hardscrabble, Reagan-era D.C. as the hotbed for a new artistic outlet in Salad Days, Crawford saw the book as a way to scoop up important narrative from the cutting-room floor and find a new home for it.
--Fast Company Pockmarked with burned-out buildings and boarded-over storefronts, Northwest DC was once home to a vibrant and sometimes violent punk movement beginning in the early 1980s. For geeky 12-year-old Scott Crawford, that changed everything: He chucked comic books for punk rock and self-published a music zine from his mother's kitchen table in Silver Spring. This month, Crawford releases a book about those days, Spoke--a companion to his 2014 documentary, Salad Days--featuring stories from local players such as Dave Grohl, Henry Rollins, and Ian MacKaye.
--Washingtonian Magazine Spoke...adroitly uses both photographs and oral histories to capture the importance of what can best be described as a cultural revolution within the nation's capital.
--Shepherd Express This coffee table version of the documentary Salad Days] follows the D.C. scene's often politically-charged brand of punk rock, from Bad Brains to Jawbox, and of course the legendary Fugazi. And there's even the near-forgotten SOA, whose frontman Henry Rollins took his D.C. energy to L.A. where he stepped in as the singer for Black Flag.
--Yellow Scene Magazine A must-have for any rock historian or pop-culture buff...The perfect punk coffee table book.
--Shockwave Magazine Highly recommended...A must read for punk fans.
--Chorus.fm/HiFiNoise A worthy addition to the growing amount of literature on the American hardcore/punk scene, Spoke will look great on any aging punks' coffee table as a document to a vital, electric time.
--Ink19.com A forthright testament to a kaleidoscopic community. This is a rounded collection, with surprises on every page...It's collection that rocks.
--Shelf Awareness for Readers
The Washington, DC punk music scene of the 1980s gave birth to influential bands like Bad Brains, Minor Threat, and Fugazi. Here that era is portrayed in its purest form: an oral history by the creators themselves, including nearly two hundred photographs capturing the power and spirit of this politically progressive corner of American underground music. This stunning and intimate collection features rare images from Jim Saah, Cynthia Connolly, Bert Queiroz, and many others who documented this vibrant community. Compiled by Scott Crawford--whose critically acclaimed film Salad Days provided an unprecedented exploration into the 1980s DC punk scene--Spoke delves deeper into one of the most dynamic movements in US music history. Featuring: BAD BRAINS, THE TEEN IDLES, BLACK MARKET BABY, SOA, MINOR THREAT, GOVERNMENT ISSUE, VOID, IRON CROSS, THE FAITH, SCREAM, MARGINAL MAN, GRAY MATTER, BEEFEATER, KING FACE, RITES OF SPRING, DAG NASTY, EMBRACE, SOULSIDE, FIRE PARTY, SHUDDER TO THINK, IGNITION, FUGAZI, SWIZ, THE NATION OF ULYSSES, and JAWBOX.
Scott Crawford is a filmmaker, music journalist, and graphic designer. As a teenager, he founded Metrozine, a fanzine dedicated to the DC hardcore punk scene. In 2001, he launched Harp magazine and served as its editor-in-chief for over seven years. His documentary debut, Salad Days, played around the world and received critical accolades from the New York Times to Rolling Stone. He lives in Washington, DC.