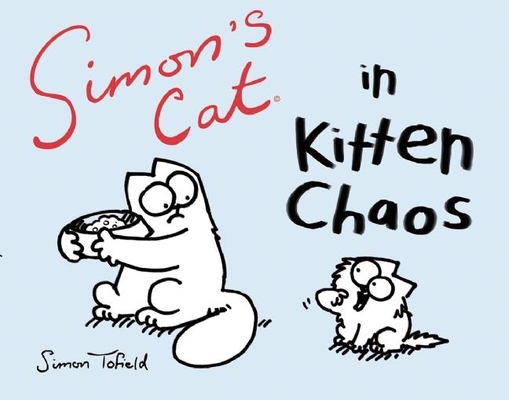 
Not On Our Shelves—Ships in 1-5 Days
Tofield's cartoons stand tall--hilarious, loving observations of a privileged and bossy housecat...What elevates Tofield's simple but expressive line drawings above the large litter of competing kitties is his keen grasp of cartoon physics and comedy cat antics. With a pitch-perfect pen, he captures the simple, realistic acrobatics of cats tumbling with toys or gracefully stretching out in the sun, and chronicles their adventures in pantomime stripes that pit them against household objects, their owner, and each other. Cat owners and aficionados will have several delighted 'Yes, cats really do that ' reactions reading this.
--Publishers Weekly (review) Simon's Cat in Kitten Chaos is the third book in a series of print cartoon books tied to Tofield's Simon's Cat YouTube channel, which has more than 30 of his charmingly illustrated cat cartoons.
--Publishers Weekly (feature) The power struggles between these two felines will certainly be familiar to anyone who has brought a new pet into the mix. Tofield has several cats in real life and bases the book's believable personalities on his own feline observations.
--Cat Fancy The phenomenon that is Simon's Cat has hit an all time high The YouTube videos of the cartoon feline have reached 200 million views online and the latest film, which is currently both the No. 1 'Most Liked' and 'Most Viewed' film on YouTube, received a million views in just two days. Simon's Cat has continued to evolve with new characters and story lines that every cat owner can relate to
--Your Cat Tofield's line drawings are fantastic. He is able to capture the essence of a cat with just a few pen strokes.
--San Francisco Book Review (5 stars) One of the hottest publishing properties of the year...What makes Simon's Cat so infinitely irresistible? There's the cute factor, but what sets Tofield's cartoons apart are the truly comic moments of pure cat-ness: the merciless patting at a half-dead fly, the single-minded determination, that weird little dance thing that segues seamlessly into a look of utter boredom.
--Irish Times Through silly pranks and stupendous surprises, the story of Simon's cat and the kitten is truly a great one. And the greatest surprise yet? The entire book is in pictures
--National Geographic Kids DogEared Book Blog Simon's Cat in Kitten Chaos continues the tradition of whimsically wordless, black-and-white cartoons about the antics of the playful, pushy, and ever-hungry pet...Although Simon's Cat in Kitten Chaos inevitably invites comparison to the popular newspaper comic character Garfield (and 'the world's cutest kitten' Nermal), the wordless, often action-filled panels are quite different in that they feature pure, rambunctious feline behavior, as any cat owners can attest--any anthropomorphic elements (such as the cat or the kitten pointing to their open mouths while hungry) are just what real cats would do if they could The gentle humor of Simon's Cat in Kitten Chaos makes it a choice gift for cat lovers everywhere.
--Midwest Book Review With over 200 million hits on YouTube, Simon's Cat is a genuine word-of-mouth phenomenon. Fans from all over the world have fallen for this adorable but anarchic feline who will do just about anything to be fed. Simon Tofield's beautiful drawings and warm humor come alive on the page in this irresistible humor book--an outgrowth of the enormously popular short films featured on YouTube. Like all great cartoon creations, from Peanuts to Asterix, from Garfield to Tintin, Simon's Cat has continued to evolve by introducing new characters and new story lines. After the runaway success of the first two books (Simon's Cat and Simon's Cat: Beyond the Fence), Simon welcomes a cuddly's millions of fans.
Simon Tofield is an award-winning illustrator, animator, and director based in London, England. At the age of nine, Simon received his first kitten, a stray rescued from a farmer's barn. He has had cats ever since. When not attending to his cats' needs, Simon likes painting, reading history books, and spending time in the great British countryside. His Simon's Cat short films have garnered hundreds of millions of views, and the book versions have been international best sellers. He is the author of Simon's Cat in Kitten Chaos and Simon's Cat vs. the World.