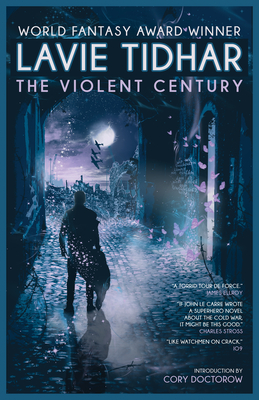 
In Stock—Click for Locations
"If John le Carre wrote a superhero novel about the Cold War, it might be this good." --Charles Stross
"A torrid tour de force." --James Ellroy
"Like Watchmen on crack."--io9 A bold experiment has mutated a small fraction of humanity. Nations race to harness the gifted, putting them to increasingly dark ends. At the dawn of global war, flashy American superheroes square off against sinister Germans and dissolute Russians. Increasingly depraved scientists conduct despicable research in the name of victory British agents Fogg and Oblivion, recalled to the Retirement Bureau, have kept a treacherous secret for over forty years. But all heroes must choose when to join the fray, and to whom their allegiance is owed--even for just one perfect summer's day.
Lavie Tidhar (A Man Lies Dreaming, Unholy Land) is an acclaimed author of literature, science fiction, fantasy, graphic novels, and middle grade fiction. Tidhar received the Campbell and Neukom Literary awards for his breakout novel Central Station, which has been translated into more than ten languages. He has also received the British Science Fiction, British Fantasy, and World Fantasy Awards. Tidhar's recent books include the Arthurian satire By Force Alone, and the series Adler. He is a book columnist for the Washington Post, and recently edited the Best of World SF anthology. Tidhar has lived all over the world, including Israel, Vanuatu, Laos, and South Africa, and he currently resides with his family in London.