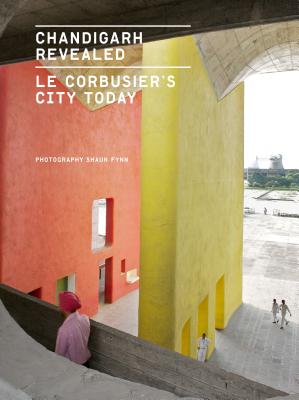 
Special Order—Subject to Availability
In 1950, Indian prime minister Jawaharlal Nehru invited legendary French-Swiss architect Le Corbusier to embark on one of the greatest experiments in urban planning history: to build a new capital—Chandigarh, a city whose monumental modernism promised to free India from the fetters of colonial tradition.

Six decades after its founding and on the eve of its becoming a UNESCO World Heritage Site in 2016, photographer and Chandigarh resident Shaun Fynn was granted unprecedented access to turn his lens on Le Corbusier's city and capture what is rarely seen: the living metropolis behind the master plan. Fynn's captivating images of the city and its inhabitants reveal how the poetry of the architect's compositions has been shaped by the tumult of everyday life.

Alongside descriptions of the city's architectural highlights, Chandigarh Revealed features a foreword by Le Corbusier authority Maristella Casciato, an essay by architectural historian Vikramaditya Prakash, an interview with M. N. Sharma—one of two surviving members of Le Corbusier's team—and custom-designed maps to orient readers.
UK–born Shaun Fynn is a designer and photographer who resides in New York and Chandigarh. A graduate of Central Saint Martins in London, he is the founder of StudioFYNN, a design and communication agency.

Fynn's award-winning work has been exhibited at the Museum of Modern Art and the Sheila C. Johnson Design Center at Parsons School of Design in New York, the Chicago Athenaeum, and Weserburg in Bremen, Germany. It has also appeared in Fast Company, the Atlantic, the Los Angeles Times, the Guardian, Graphis, International Design Yearbook, and Repertorio del Design Italiano, 1950–2000.

Fynn is a visiting lecturer at the National Institute of Design in Ahmedabad, the Indian Institute of Technology in Mumbai, ArtCenter College of Design in Los Angeles, and Parsons School of Design. He is also a fellow of the Royal Society of Arts.
"In his new book, Chandigarh Revealed, photographer, designer, and writer Shaun Fynn examines the reality of the planned city, creating a photographic profile that shows how "the patina of time" has shaped the city in unforeseen ways..[T]ime, climate, and neglect (many structures are abandoned or incomplete) have taken their toll, as Fynn's photos show. Chandigarh Revealed expertly captures the impact on the complex, as well as the chaotic adaptations and adjustments made by contemporary Indian residents." - Curbed

Combining detailed plans and contextualising information with a wealth of viscerally engaging yet strangely haunting photography, Fynn opens a door into what it's like to live in present-day Chandigarh - a UNESCO World Heritage Site that retains a sense of mystery. Fynn captures moments of pride as well as flashes of decay. The text also includes invaluable insight in an interview with one of Le Corbusier's original team.

"Chandigarh tells a story in which the architectural visions of a great master meet the political visions of a postcolonial society," writes Shaun Fynn in the introduction to his book on the Indian city designed by Le Corbusier. How have those visions worked out, more than six decades on? It really takes photographs-with which the book is amply illustrated-to say. Le Corbusier's raw concrete surfaces have retained their brutal beauty, but some of the city's parks, notes Fynn, have suffered: "Today Chandigarh is a city proud to display its private wealth through prosperity and automobile assets, while the upkeep and preservation of the civic space remains an ongoing issue." - Landscape Architecture

"Fynn provides a superb look at North India's Chandigarh, Le Corbusier's singular planned city, 60 years after its completion..The book reveals a futuristic vision that has been absorbed by contemporary Indian society without being subsumed, showcasing both Corbusier's tremendous work and modern accretions and deviations....This is a visually astute and intimately observed study." - Publisher's Weekly

"In Chandigarh Revealed, UK born designer and photographer Shaun Fynn has captured the spirit of Chandigarh-giving us an honest portrayal of the contemporary city through his camera's lens, complete with essays on the city's political and urban planning history, and providing us with a rare glimpse into how the city has fared in its first half century.. Chandigarh Revealed is a frank and honest portrayal of this city. It is a wonder to behold, pointing out that while Chandigarh is not perfect, it is as close to the ideal as could be given its volatile mixture of religion, politics, and geography. all orchestrated by an architect whose vision of how order could be achieved helped to shape the modern world and all that would follow."
-Spacing (Canada)

"First planned and designed to accommodate some 500,000 people, today, more than a million people live in Chandigarh, as the city has expanded, and slums have taken over areas where the plan was never fully realized. Some 50 years later, Le Corbusier and Nehru's city appears both glorious and derelict, visionary and an anachronism in Chandigarh Revealed, a fascinating new book by photographer and designer Shaun Fynn." - The Dirt (American Society of Landcape Architects)