Propaganda Technique in the World War (with Supplemental Material) (Paperback) 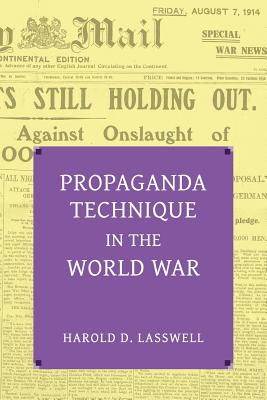 Propaganda Technique in the World War (with Supplemental Material) (Paperback)


Not On Our Shelves—Ships in 1-5 Days
"Professor Lasswell has made a most important contribution to the study of war. Basing his essay upon the thesis that modern war must be fought on three fronts, the military, the economic and the propagandist, he has given a comprehensive account of the direction of the third front in the World War. His bibliography is extensive, including more than a hundred books and articles of recent date upon the specific propaganda of the World War, or in general discussion of public opinion inspired by it." (New Republic, 1927) Harold D. Lasswell's thesis offers a general theory of the strategy and role of propaganda within a military campaign. While the examples focus on the First World War, the principles and patterns carry over to modern day warfare, politics, business, and social movements. We undergo a constant barrage of overt and covert propaganda, which can only be effectively countered by recognizing it and understanding its function. This well-written book is both objective and discerning while explaining how and why propaganda works. This reprint includes two supplemental papers, "Propaganda behind the lines," by Maj. C. J. C. Street, and "Control of propaganda as a psychological problem," by Prof. Edward K. Strong, Jr., both referenced in Lasswell's text.