Wall Disease: The Psychological Toll of Living Up Against a Border (Paperback) 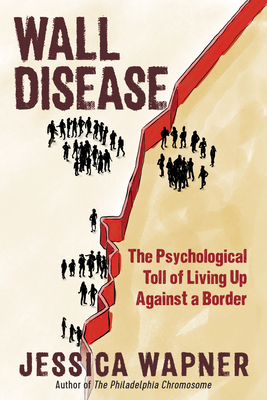 Wall Disease: The Psychological Toll of Living Up Against a Border (Paperback)


Not On Our Shelves—Ships in 1-5 Days
We build border walls to keep danger out. But do we understand the danger posed by walls themselves?

East Germans were the first to give the crisis a name: Mauerkrankheit, or “wall disease.” The afflicted—everyday citizens living on both sides of the Berlin wall—displayed some combination of depression, anxiety, excitability, suicidal ideation, and paranoia. The Berlin Wall is no more, but today there are at least seventy policed borders like it. What are they doing to our minds?

Jessica Wapner investigates, following a trail of psychological harm around the world. In Brownsville, Texas, the hotly contested US-Mexico border wall instills more feelings of fear than of safety. And in eastern Europe, a Georgian grandfather pines for his homeland—cut off from his daughters, his baker, and his bank by the arbitrary path of a razor-wire fence built in 2013. Even in borderlands riven by conflict, the same walls that once offered relief become enduring reminders of trauma and helplessness.

Our brains, Wapner writes, devote “border cells” to where we can and cannot go safely—so, a wall that goes up in our town also goes up in our minds. Weaving together interviews with those living up against walls and expert testimonies from geographers, scientists, psychologists, and other specialists, she explores the growing epidemic of wall disease—and illuminates how neither those “outside” nor “inside” are immune.
Jessica Wapner is a journalist and former science editor at Newsweek whose work has appeared in The New Yorker, The New York Times, Wired, Medium, Discover, Popular Science, Self, Scientific American, New York magazine, The Atlantic, and elsewhere. Her first book, The Philadelphia Chromosome, was named a top ten nonfiction book by The Wall Street Journal. She lives in Brooklyn.
2020 Foreword INDIES Finalist

“An important contribution that raises public awareness about the potential harm caused by border walls.”—Science

“Wall Disease is a sobering and stunning read at a time when countries all around the world are building fences.”—Reinventing Home

“Wall Disease completely reframes our conversations about what a border should look like. Jessica Wapner spells out the intense psychological toll of border walls—the emotional destruction they wreak on individuals around the world. This is required reading for political leaders and invested citizens alike.”—DW Gibson, author of 14 Miles: Building the Border Wall

“Walls separate us. They also, Jessica Wapner shows, mess us up in less visible ways. This revelatory book is a reminder of how bizarre our walled-off world is—and how much we have to gain by tearing these walls down.”—Daniel Immerwahr, author of How to Hide an Empire

“How would you like to live next to a border wall?  How would you like to be stuck on the wrong side of one?  In Wall Disease, Jessica Wapner tells the tales of people on both sides of the border who answer these questions from bitter personal experience—and tells these tales with compassion and eloquence.”—Bryan Caplan, author of Open Borders: The Science and Ethics of Immigration