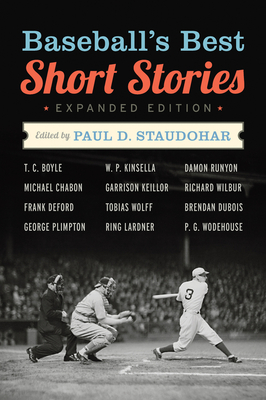 This expanded edition features the best-loved short stories from the 20th century as well as new tales from some of the 21st century’s most iconic names in fiction.

No other sport has inspired as many great writers as baseball has, and this exceptional anthology brings together 34 short stories about the nation’s favorite pastime. The stories span several decades and are written by some of America’s favorite writers, including Zane Grey, James Thurber, Robert Penn Warren, T. Coraghessan Boyle, and Michael Chabon, among others. Many of the stories are about the game itself, while others use baseball as a backdrop for timeless themes, such as morality, greed, and love. Eight new stories have been added to this expanded edition and include “Bullet in the Brain” by Tobias Wolff, in which baseball is the surprising last memory of a dying man; George Plimpton’s “The Curious Case of Sidd Finch,” a fictional story about a baseball player who throws a 150-mph fastball that was a notorious April Fools’ Day hoax in Sports Illustrated; and Leslie Pietrzyk’s “What We All Want,” about a pitcher’s wife’s concern for her aging husband. This collection is for all baseball lovers—long after the season is over.

"A thoroughly enjoyable addition to any library, whether or not the original is still on the shelves."  —Booklist

“An exciting collection of some of the best 20th-century writers venturing into some unexpected venues.”  —Arizona Daily Star

"This delightful collection, running from photographic realism to fantasy, is baseball at its best. Truth may be stranger than fiction, but these stories demonstrate that fiction can be truer than fact. If you like baseball, you owe yourself this treat."  —Leonard Koppett, Hall of Fame Sportswriter

“Staudohar has hit it out of the park.”  —Publishers Weekly

"Baseball fans and those who appreciate its cultural impact will welcome this. Highly recommended."  —Library Journal

"The classic collection for the 21st century . . . Every American home needs a bookcase devoted to baseball literature, from Bernard Malamud's The Natural to Elliot Asinof's Eight Men Out. Make a little more room for this one."  —Creative Loafing Tampa