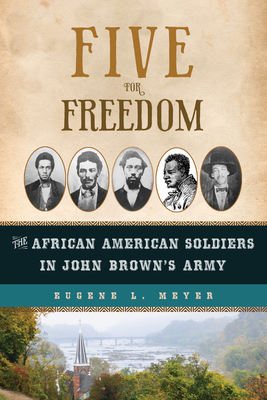 
In Stock—Click for Locations
On October 16, 1859, John Brown and his band of eighteen raiders descended on Harpers Ferry. In an ill-fated attempt to incite a slave insurrection, they seized the federal arsenal, took hostages, and retreated to a fire engine house where they barricaded themselves until a contingent of US Marines battered their way in on October 18.
The raiders were routed, and several were captured. Soon after, they were tried, convicted, and hanged. Among Brown’s fighters were five African American men—John Copeland, Shields Green, Dangerfield Newby, Lewis Leary, and Osborne Perry Anderson—whose lives and deaths have long been overshadowed by their martyred leader and who, even today, are little remembered. Only Anderson survived, later publishing the lone insider account of the event that, most historians agree, was a catalyst to the catastrophic American Civil War that followed.
Five for Freedom is the story of these five brave men, the circumstances in which they were born and raised, how they came together at this fateful time and place, and the legacies they left behind. It is an American story that continues to resonate.
Eugene L. Meyer is an award-winning journalist and author and a former longtime reporter and editor at the Washington Post whose work has also appeared in the New York Times, U.S. News & World Report, and many other national and regional publications. He is a contributing editor for Bethesda magazine and lives in Silver Spring, Maryland.
"Finding fascinating stories that other writers miss has been Eugene Meyer's calling card for decades, and he has done it again with this important and largely untold story of five men forgotten in the John Brown legend." —David Maraniss, Pulitzer Prize–winning author of They Marched into Sunlight: War and Peace, Vietnam and America, October 1967


"Eugene Meyer has given the story of John Brown's raid on Harpers Ferry new meaning and relevance by restoring Brown's black collaborators to their rightful place in history. Five for Freedom elevates the names Newby, Anderson, Copeland, Leary, and Green to stand with Brown as individuals who were willing to sacrifice their own lives to rid our country of the horror of chattel slavery." —Margot Lee Shetterly, author of Hidden Figures

"Deftly weaving history and biography, Meyer reconstructs how these five men came to join the ill-fated attempt to spark a slave revolt. Their role will not be forgotten now that—at long last—it is contained in an engaging and memorable book.” —James McGrath Morris, author of Eye on the Struggle: Ethel Payne, the First Lady of the Black Press.

"Eugene L. Meyer has brought to light the central role of the leadership in the black community at the time of the raid... His book has done these freedom fighters a great service.” —Frank Smith, founding director, African American Civil War Memorial Museum

"this book rectifies a glaring omission, focusing on those who stood with John against all odds; but who have largely been forgotten by history."—Midwest Book Review

"Academic readers will find much to admire in Meyer’s remarkable book. It is a well-written microhistory of these men in the raid; yet it is also an account of the lingering echoes of their life and death in the decades sense . . . Detailing their lives before the raid, the author provides readers with a fascinating microstudy of antebellum black life in slavery and freedom . . . I cannot recommend this book enough. The general reader will enjoy its accessibility, but it will also be excellent in the undergraduate classroom. Meyer’s study highlights many critical issues related to the Civil War and its memory and legacy."—Barbara Cannon, author of The Won Cause: Black and White Comradeship in the Grand Army of the Republic