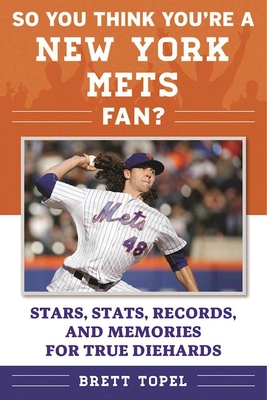 
Not On Our Shelves—Ships in 1-5 Days
So You Think You’re a New York Mets Fan? tests and expands your knowledge of Mets baseball. Rather than merely posing questions and providing answers, this book will give you the details behind each—stories that bring to life players and coaches, games and seasons.

This book is divided into multiple parts, with progressively more difficult questions in each new section. Along the way, you’ll learn more about the great Mets players and managers of the past and present, from Tom Seaver to Gary Carter, Keith Hernandez, Lee Mazzilli, Davey Johnson, Dave Kingman, Gil Hodges, Jerry Koosman, Jon Matlack, John Stearns, Darryl Strawberry, Mike Piazza, Edgardo Alfonzo, Matt Harvey, David Wright, and so many more. The many questions that this book answers include:

• Who was drafted number one overall by the Mets in 1984?
• Who was on deck when Mookie Wilson hit his famous ground ball to Bill Buckner?
• There are two men enshrined in Cooperstown wearing Mets caps on their plaques, but there are 12 other Hall of Famers who played for the Mets at one point in their career. Name them.
• What do the Mets' World Series MVPs from 1969 and 1986 have in common?
• The two pitchers who were on the mound in 1969 and 1986 when the final out of each World Series was made were actually traded for each other. Name them.

This book makes the perfect gift for any fan of the Amazin’s!
Brett Topel is the author of three books—So You Think You’re a New York Mets Fan?: Stars, Stats, Records, and Memories for True Diehards, When Shea Was Home: The Story of the 1975 Mets, Yankees, Giants and Jets, and Simply the Best: The Story of the 1929-31 Philadelphia Athletics Dynasty. Topel is the Director of Communications at Buckley Country Day School on Long Island and is an adjunct professor of journalism at Adelphi University.