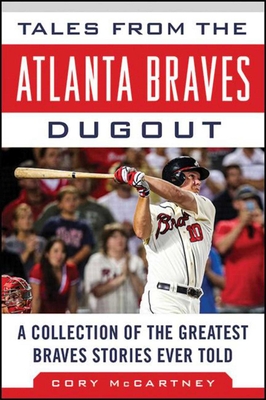 Recall the harrowing experience of Atlanta–Fulton County Stadium catching fire on July 21, 1993, overshadowing the debut of Fred McGriff, and read all about Sid Bream's slide and the worst-to-first season of 1991.

From the run of 14 consecutive division titles and the 1995 World Series title, to Kent Mercker's 1994 no-hitter; from the arrival of the Baby Braves in Brian McCann, Jeff Francoeur, and others, to the 2014 Hall of Fame induction of Tom Glavine, Greg Maddux, and Bobby Cox, the on and off the field stories are all here.

This is the perfect addition to a Braves fan’s shelf!

Skyhorse Publishing, as well as our Sports Publishing imprint, are proud to publish a broad range of books for readers interested in sports—books about baseball, pro football, college football, pro and college basketball, hockey, or soccer, we have a book about your sport or your team. Whether you are a New York Yankees fan or hail from Red Sox nation; whether you are a die-hard Green Bay Packers or Dallas Cowboys fan; whether you root for the Kentucky Wildcats, Louisville Cardinals, UCLA Bruins, or Kansas Jayhawks; whether you route for the Boston Bruins, Toronto Maple Leafs, Montreal Canadiens, or Los Angeles Kings; we have a book for you. While not every title we publish becomes a New York Times bestseller or a national bestseller, we are committed to publishing books on subjects that are sometimes overlooked by other publishers and to authors whose work might not otherwise find a home.
Cory McCartney is a writer for FOXSportsSouth.com and a member of the Baseball Writers' Association of America. Previously with Sports Illustrated, his work has also appeared on CNN.com, and he served as an analyst for the Big Ten Network. He lives in the Atlanta metropolitan area with his wife and two children.