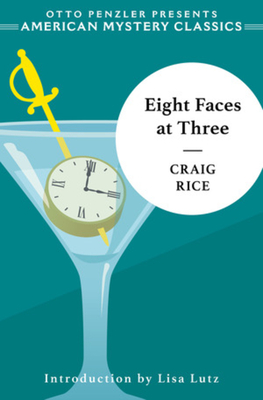 John J. Malone, defender of the guilty, is notorious for getting his culpable clients off. It’s the innocent ones who are problems. Like Holly Inglehart, accused of piercing the black heart of her well-heeled and tyrannical aunt Alexandria with a lovely Florentine paper cutter. No one who knew the old battle-ax liked her, but Holly’s prints were found on the murder weapon. Plus, she had a motive: She was about to be disinherited for marrying a common bandleader.

With each new lurid headline, Holly’s friends and supporters start to rally. There’s North Shore debutante Helene Brand; Holly’s groom’s press agent, Jake Justus; the madam of a local brothel, and Alexandria’s hand-wringing servants. But not one of them can explain the queerest bent to the crime: At the time of the murder, every clock in the Inglehart mansion stopped dead. And that’s only the first twist in a baffling case of “aunty-cide”—because Alexandria won’t be the last to die.

The first novel in Rice’s John J. Malone series, Eight Faces at Three introduces the hard-drinking Chicago-based attorney that made the author a household name. Comic, witty, and lush, the Malone books are a throwback to a time when alcoholism was commonplace and murder (or, reading about murder) was fun. Fans of Dashiell Hammett’s The Thin Man series and Richard and Frances Lockridge’s Mr. and Mrs. North will find much to enjoy in the witty banter of Malone and his constant companions, Brand and Justus.

Includes discussion guide questions for use in book clubs.

Craig Rice (1908–1957), born Georgiana Ann Randolph Craig, was an American author of mystery novels, short stories, and screenplays. In 1946, she became the first mystery writer to appear on the cover of Time magazine. Best known for her character John J. Malone, a rumpled Chicago lawyer, Rice’s writing style was unique in its ability to mix gritty, hard-boiled writing with the entertainment of a screwball comedy. She also collaborated with mystery writer Stuart Palmer on screenplays and short stories, and ghost-wrote several titles published under the byline of actor George Sanders.

Lisa Lutz is the author of the New York Times bestselling, Edgar Award– and Macavity Award–nominated, and Alex Award–winning Spellman Files series, as well as the novels How to Start a Fire, The Passenger, and The Swallows. She lives and works in upstate New York.
There never was anyone else like Craig Rice.
— New York Times