The Psalms of David: Pointed and Edited for Chanting by George H. Guest (Hardcover) 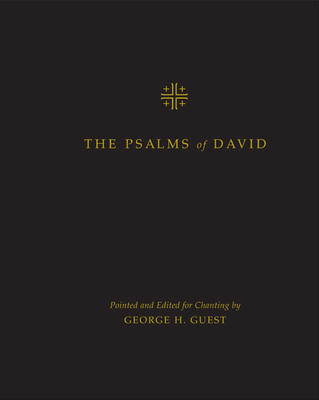 The Psalms of David: Pointed and Edited for Chanting by George H. Guest (Hardcover)


Not On Our Shelves—Ships in 1-5 Days
Tunes in this Psalter were collected by Dr. George Guest during his 40 year tenure as Organist and Choirmaster of St. John's College, Cambridge University, Cambridge, England. They are arranged according to the 1928 Book of Common Prayer of the Protestant Episcopal Church in America, and are pointed for chanting.

"Informed by a quiet but profound spirituality, Dr. Guest directed the music at St. John's College, Cambridge University for 40 years until his retirement in 1991, where he was university organist (1974-91) and lecturer (1956-82). Guest often remarked that you can only reach a man's head through his heart. It is not therefore surprising that, as the years went on, the chanting of the psalms became an ever more considered and thoughtful meditation. He realized that the Anglican Evensong was the Church of England's greatest gift to the Christian world. It was his genius to give a unique and abiding expression to that liturgy that will live for generations to come."
John Gummer, The Guardian
Dr. George Howell Guest (1924-2002) was the organist and choirmaster of St. John's College in Cambridge, England for forty years (1951-1991). His career at St. John's included the production of some sixty choral recordings, countless radio broadcasts, and numerous international tours—evidence of the importance he placed on spreading the sound of sacred choral music beyond the walls of churches and chapels. Even so, Guest was completely dedicated to the choir's ministry in its home chapel, where it was known that, on the coldest of winter evenings, the men and boys of St. John's Choir would sing Evensong even with only three or four people in attendance. Guest believed that the music was first and foremost a prayer offered to God, not a concert performed for an audience.

During those four decades at St. John's, George Guest set a standard for musical interpretation and choral sound that still inspires choirs around the world. He was especially concerned that the highest levels be reached in clarity of sound, in shaping of line, and in directness of expression so that the meaning of the text would always be conveyed. Words, he said, were more important than music.

Dr. Guest was deeply influenced by the beauty of the Gregorian chant sung by the monks of the Abbey of St. Peter in Solesmes, France, a sound that only enhanced his commitment to the highest quality of performance of Anglican chant. He often remarked, wrote The Guardian (December 4, 2002), "that you can only reach a man's head through his heart."