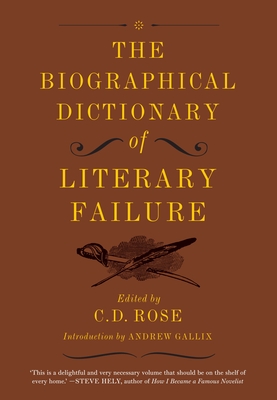 
Special Order—Subject to Availability
A darkly comic, satirical reference book about writers who never made it into the literary canon

A signal event of literary scholarship, The Biographical Dictionary of Literary Failure compiles the biographies of history’s most notable cases of a complete lack of literary success. As such, it is the world’s leading authority on the subject.

Compiled in one volume by C. D. Rose, a well-educated person universally acknowledged in parts of England as the world’s pre-eminent expert on inexpert writers, the book culls its information from lost or otherwise ignored archives scattered around the globe, as well as the occasional dustbin.

The dictionary amounts to a monumental accomplishment: the definitive appreciation of history’s least accomplished writers. Thus immortalized beyond deserving and rescued from hard-earned obscurity, the authors presented in this historic volume comprise a who’s who of the talentless and deluded, their stories timeless litanies of abject psychosis, misapplication, and delinquency.

It is, in short, a treasure.
C. D. ROSE was born in the north of England and studied in several of that country’s elite universities, including the University of East Anglia, where he went to do an M.A. in creative writing, and Edge Hill University, where he is at work on a Ph.D. His research into great lost literary works drew him on to live and work in several different countries, including Italy, France, Russia and the United States, where he enjoyed a number of encounters with curious authorial personalities. His research interests have not abated, and now, though based in England, he continues to travel in an unending quest for that one elusive, perfect tale.
“Rose writes with wit, playfulness and an impressive knowledge... An author to reckon with, one whom Borges and Max Beerbohm would have admired... We haven’t heard the last of C.D. Rose.”
—Washington Post

“Nuanced... Though the vignettes are fictional, most are entertaining and all could serve as warnings to anyone thinking of taking up the literary life."
—Wall Street Journal

“An anthology that cleverly calls out the ways in which we dramatize—and idolize—the lives of authors, successful and not."
—Huffington Post

“This selection may appear to break the rules, but this hilarious 'dictionary' of literary may not be as non-fictional as you think. It helped inspire my new favorite life-negating maxim: fail worse and go out on bottom."
—Flavorwire, 50 Best Independent Fiction and Poetry Books of 2014

“Spend an hour with it...for a bracing, mordant reminder of why almost nothing is really worth bothering with."
—Paris Review, Staff Picks

One of Liberty Hardy's (RiverRun Bookstore) Must-Read Books from Indie Presses for 2014, on Book Riot

“Wonderful... A must read."
—PopMatters

“This gloriously delicious testament to efforts of the wordy kind that seem to have gone off the rails offers the literary shenanigans of some rather suspect authors."
—BookTrib

“[A] delightful compendium... The BDLF is a clever put-on, a brisk stroll...guided by Rose’s fastidious prose and copious literary references, but it is also a clarion for the infinite possibilities of literature."
—Failure Magazine

“This lovely brown book presents insights into 52 literary failures…collected by C D Rose and retold with both care and wit. Every single one made me laugh, and I don’t just mean with schadenfreude or a dry resigned croak at the common fate of so many writers. As unlikely as it sounds, I found this book immensely cheering.”
—Mind and Language

“A glorious alphabetical compendium of those who never achieved greatness.”
—Stuart Kelly, Books of the Year, The Scotsman (UK)

“More a short story collection than a dictionary, this book is an homage to the many ways writers can fail... Failure. Of the most spectacular kind."
—LitReactor

“Offers us a shadow history of literature... Whether the subject is Icarus-like or more of a Walter Mitty, Rose’s writing is unfailingly sympathetic and inventive."
—Workshy Fop

“A series of clever (and occasionally hilarious) literary vignettes… Rose makes highly literate and arcane references to a vast number of authors and literary theoreticians, and it’s great fun for the reader to become part of the game.”
—Kirkus Reviews, starred review

“Tongue is definitely in cheek here… Each [writer] fail[s] better than the one before.”
—Booklist

"A page turner of the best sort of slow motion, train wreck sort of way... Give this petite compendium a read!"
—Susan Mulder, Rejection Chronicles

"A wonderful book. At long last someone has invented these failures and given them their due. We owe C. D. Rose an incalculable debt."
—Steve Hely, author of How I Became A Famous Novelist

"A funny look at literary legends who, for one reason or another, managed to fall into oblivion (or fail to get noticed in the first place). From authors leaving masterpieces on trains, to those who compulsively--and literally--eat their words, this book will get you thinking about losses to literature that we'll never get to hear about. Just don't eat this book, please. Or, if you must, buy another copy afterwards... and restrain yourself from eating that one, too."
—Jen Campbell, author of Weird Things Customers Say in Bookshops and The Bookshop Book
For This Book...
Staff Pick