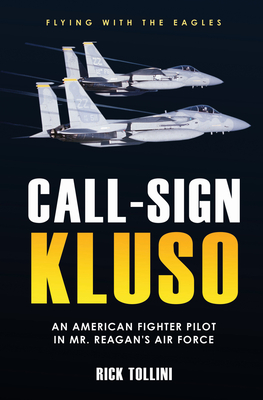 
Special Order—Subject to Availability
The life and experiences of Gulf War Ace Rick Tollini, in his own words.

Eagle pilot Rick "Kluso" Tollini's life has embodied childhood dreams and the reality of what the American experience could produce. In his memoir, Call Sign KLUSO, Rick puts the fraught minutes above the Iraqi desert that made him an ace into the context of a full life; exploring how he came to be flying a F-15C in Desert Storm, and how that day became a pivotal moment in his life.

Rick's first experience of flying was in a Piper PA-18 over 1960s' California as a small boy, and his love of flying through his teenage years was fostered by his pilot father, eventually blossoming into a decision to join the Air Force as a pilot in his late twenties. Having trained to fly jets he was assigned to fly the F-15 Eagle with the "Dirty Dozen," the 12th Tactical Fighter Squadron, at Kadena AB, Japan before returning Stateside to the 58th Tactical Fighter Squadron "The Gorillas." Throughout training, Reagan's fighter pilots expected to face the Soviet Union, but Rick's first combat deployment was Desert Storm. He recounts the planning, the preparation, and the missions, the life of a fighter pilot in a combat zone and the reality of combat. Rick's aerial victory was one of 16 accumulated by the Gorillas, the most by any squadron during Desert Storm.

Returning from the combat skies of Iraq, Rick continued a successful fulfilling Air Force career until, struggling to make sense of his life, he turned to Buddhism. His practice led him to leave the Air Force, to find a new vocation, and to finally come to terms with shooting down that MiG-25 Foxbat in the desert all those years before. Most importantly, he came to a deeper understanding of the importance of our shared humanity.