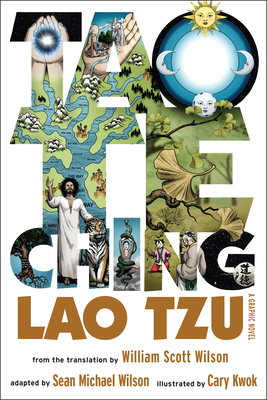 
Special Order—Subject to Availability
A contemporary graphic novel adaptation of a spiritual classic.

This graphic-novel version of the Tao Te Ching—the poetic classic that is the philosophical and religious basis of Taoism—brings the teachings into a modern light in a completely fresh and unique way. Each of the 81 poem-passages of the Tao Te Ching is reinterpreted by award-winning graphic novel writer Sean Michael Wilson and brought to life by the artful illustrations of Hong Kong artist Cary Kwok, who sets the text in various contemporary scenes to bring out the modern relevance.
SEAN MICHAEL WILSON is a comic book writer from Scotland, living in Japan. He has had many books published with a variety of US, UK, and Japanese publishers, such as The Book of Five Rings, and edited the critically acclaimed AX: alternative manga (Publishers Weekly’s “Best Books of 2010” in comics). In 2016, his book Lafcadio Hearn’s “The Faceless Ghost” and Other Macabre Tales from Japan was nominated for the prestigious Eisner Award. And in 2017, his book Secrets of the Ninja won an International Manga Award from the Japanese Government.

CARY KWOK is a visual artist based in London. Kwok's work has been exhibited in many of the world's leading private and not-for-profit galleries including Galerie Emanuel Perrotin, Hauser & Wirth, Taro Nasu, Herald Street, FLAG Art Foundation, the ICA, Studio Voltaire and Tate Britain. His work has been featured in a myriad of art titles and Visionaire 46, guest edited by Mario Testino.
“Engaging, well researched, and very relatable. The translation by William Scott Wilson is thorough. The art by Cary Kwok is alluring and vivid. Altogether, the creative team has made this essential text even more compelling not only for those interested in theology but also philosophy.”—Graphic Policy