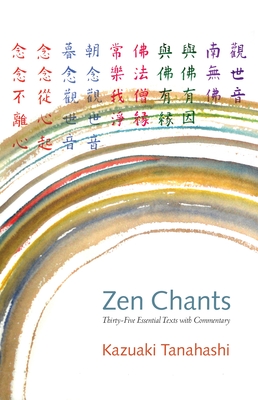 
Special Order—Subject to Availability
An introduction to Zen chanting practice, with new accurate and chantable translations of the texts used in Zen centers and monasteries throughout the English-speaking world—by the renowned translator of Dogen and Ryokan.

A Zen chant is like a compass that sets us in the direction of the awakened life; it is the dynamic, audible counterpart to the silent practice of zazen, or sitting meditation; and it is a powerful expression of the fact that practice happens in community. Here is a concise guide to Zen chants for practitioners, as well as for anyone who appreciates the beauty and profundity of the poetry in dharma. An introduction to the practice is followed by fresh and carefully considered translations and adaptations of thirty-five chants—some common and others less well known—along with illuminating commentary.
KAZUAKI TANAHASHI has edited several collections of the writings of Eihei Dogen, including the definitive translation of the Treasury of the True Dharma Eye: Zen Master Dogen’s Shobo Genzo. His other books include Brush Mind; Sky Above, Great Wind: The Life and Poetry of Zen Master Ryokan; and The Heart Sutra: A Comprehensive Guide to the Classic of Mahayana Buddhism. He is also a renowned calligraphic artist whose work has been exhibited throughout the world.