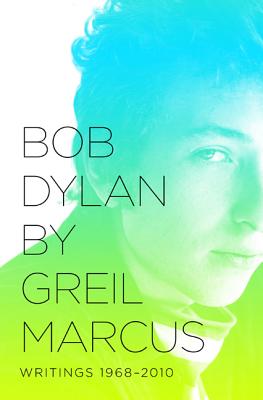 
Not On Our Shelves—Ships in 1-5 Days
Nobel Prize winner Bob Dylan's life in music is revisited by his foremost interpreter -- weaving individual moods and moments into a brilliant history of their changing times.

The book begins in Berkeley in 1968, and ends with a piece on Dylan's show at the University of Minnesota -- his very first appearance at his alma mater -- on election night 2008. In between are moments of euphoric discovery: From Marcus's liner notes for the 1967 Basement Tapes (pop music's most famous bootlegged archives) to his exploration of Dylan's reimagining of the American experience in the 1997 Time Out of Mind. And rejection; Marcus's Rolling Stone piece on Dylan's album Self Portrait -- often called the most famous record review ever written -- began with "What is this shit?" and led to his departure from the magazine for five years. Marcus follows not only recordings but performances, books, movies, and all manner of highways and byways in which Bob Dylan has made himself felt in our culture.

Together the dozens of pieces collected here comprise a portrait of how, throughout his career, Bob Dylan has drawn upon and reinvented the landscape of traditional American song, its myths and choruses, heroes and villains. They are the result of a more than forty-year engagement between an unparalleled singer and a uniquely acute listener.
Greil Marcus is the author of Bob Dylan by Greil Marcus, When that Rough God Goes Riding, The Shape of Things to Come, Mystery Train, Dead Elvis, In the Fascist Bathroom, Double Trouble, Like a Rolling Stone, and The Old Weird America; a twentieth anniversary edition of his book Lipstick Traces was published in 2009.

With Werner Sollors he is the editor of A New Literary History of America, published last year by Harvard University Press. Since 2000 he has taught at Princeton, Berkeley, Minnesota, and the New School in New York; his column "Real Life Rock Top 10" appears regularly in the Believer. He has lectured at U Cal, Berkeley, The Whitney Museum of Art, and Princeton University. He lives in Berkeley.
San Francisco Chronicle, November 28, 2010
“Why read anyone else's work on Dylan? Through previous tomes like Invisible Republic and Like a Rolling Stone, the Berkeley-based Marcus has done more to build the Dylan myth than the curmudgeonly man himself.” Boston Globe, November 26, 2010
“If anyone is worthy of an entire collection of critiques of Bob Dylan, it’s Marcus. The rock critic and cultural commentator has astutely chronicled Dylan’s trajectory for more than four decades through record reviews, essays, and books.”