Confessions of a Microfinance Heretic: How Microlending Lost Its Way and Betrayed the Poor (Hardcover) 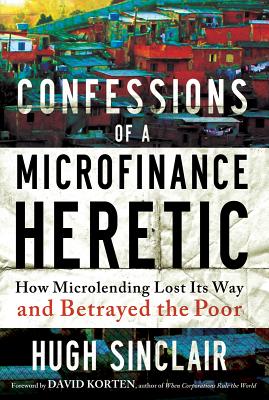 Confessions of a Microfinance Heretic: How Microlending Lost Its Way and Betrayed the Poor (Hardcover)


Special Order—Subject to Availability
Very little solid evidence exists that microloans make a dent in long-term poverty. Sadly, evidence does exist for negligence, corruption, and methods that border on extortion. Part exposé, part memoir, and part financial detective story, this is the account of a one-time true believer whose decade in the industry turned him into a heretic.

Hugh Sinclair worked with several microfinance institutions around the world. He couldn’t help but notice that even with a booming $70 billion industry on their side, the poor didn’t seem any better off. Exorbitant interest rates led borrowers into never-ending debt spirals, and aggressive collection practices resulted in cases of forced prostitution, child labor, suicide, and nationwide revolts against the microfinance community.

Sinclair weaves a shocking tale of a system increasingly focused on maximizing profits—particularly once large banks got involved. He details his discovery of several scandals, one of the most disturbing involving a large African microfinance institution of questionable legality that charged interest rates in excess of 100 percent per year and whose investors and supporters included some of the most celebrated leaders of the microfinance sector. Sinclair’s objections were first met with silence, then threats, attempted bribery, and a court case, and eventually led him to become a principal whistleblower in a sector that had lost its soul.

Microfinance can work—Sinclair describes moving experiences with several ethical and effective organizations and explains what made them different. But without the fundamental reforms that Sinclair recommends here, microfinance will remain an “investment opportunity” that will leave the poor with hollow promises and empty pockets.
Hugh Sinclair has worked in microfinance with numerous global organizations, banks, and funds for over a decade. He currently consults on microfinance strategy and portfolio management. Previously, he worked in traditional finance at ING Barings, CDC Capital Partners, and BZW Securities—now Barclays Capital. Sinclair holds a master’s degree in international and corporate finance from the University of Durham and a master of business administration from IESE Business School.

Among his accomplishments are being the first to deliver a Harvard Business School case study in Mongolian and achieving the Guinness World Record for the fastest motorcycle tour from Prudhoe Bay, Alaska, to the tip of South America. He speaks frequently at business schools and microfinance conferences.
“Confessions of a Microfinance Heretic is essential reading for anyone interested in development economics, a disturbing and yet ultimately hopeful exposé.”
—John Perkins, New York Times bestselling author of Confessions of an Economic Hitman

“This is a very important and courageous book. Hugh Sinclair tells a gripping story of idealism, naiveté, callousness, greed, and corruption in the microfinance industry to show how it has been overrun by a new breed of loan sharks who make us believe they are helping the poor when they are actually exploiting them. This sobering tale should be a valuable guide to a reform program that will save what is still good in microfinance and help it make the contribution it can make without the absurd hype that has characterized the industry.”
—Ha-Joon Chang, Reader in the Political Economy of Development, University of Cambridge, and author of Bad Samaritans and 23 Things They Don’t Tell You About Capitalism

“An intriguing book that cuts to the core of microfinance. If you are looking to understand and invest in effective microfinance, this book provides an overview and helps you select the vehicle that suits your needs. Good microfinance is undoubtedly possible…structure, dedication, and full transparency is the way forward.”
—Mads Kjaer and Tim Vang, cofounders, MYC4.com

“In often shocking but sometimes hilarious detail, Sinclair describes how he was sucked into the global feeding frenzy created by the microfinance industry’s determined search for profit, and he angrily exposes how microfinance ended up destroying the lives of the very people it was supposed to be helping. For anyone who still labors under the illusion that microfinance is all about helping the poor, Sinclair’s passionate, lively, and eye-opening exposé of the inner workings of the microfinance industry is an absolute must-read.”
—Milford Bateman, freelance consultant, Visiting Professor of Economics, University of Juraj Dobrila at Pula, Croatia, and author of Why Doesn’t Microfinance Work?

“Provides a devastating, insightful, and well-documented look into the tragic reality of how a good idea was derailed by the Wall Street greed syndrome. It is essential reading not only for anyone involved in microcredit but also for all who seek an end to global poverty and injustice.”
—David Korten, Board Chair, Yes! Magazine, and author of Agenda for a New Economy and When Corporations Rule the World