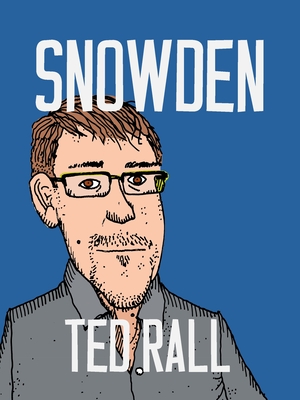 
Special Order—Subject to Availability
As many as 1.4 million citizens with security clearance saw some or all of the same documents revealed by Edward Snowden. Why did he, and no one else, decide to step forward and take on the risks associated with becoming a whistleblower and then a fugitive? Rall delves into Snowden's early life and work experience, his personality, and the larger issues of privacy, new surveillance technologies, and the recent history of government intrusion. Rall describes Snowden's political vision and hopes for the future. In a way, the book tells two stories: Snowden's and a larger one that describes all of us on the threshold of tremendous technological upheaval and political change.

Snowden is a portrait of a brave young man standing up to the most powerful government in the world and, if not winning, at least reaching a stand-off, and in this way is an incitation to us all to measure our courage and listen to our consciences in asking ourselves what we might have done in his shoes.
Twice the winner of the Robert F. Kennedy Journalism Award and a Pulitzer Prize finalist, TED RALL is a political cartoonist, opinion columnist, graphic novelist and occasional war correspondent whose work has appeared in hundreds of publications, including the New York Times, Washington Post, Village Voice, and Los Angeles Times. He is the illustrator of the full-length comic in Billionaires & Ballot Bandits: How to Steal an Election in 9 Easy Steps, written by Greg Palast.
"A darkly funny look at our ongoing surveillance nightmare. ... An entertaining, exhaustive, and approachable look at an incredibly important and relevant topic, because information security affects everyone whether you like it or not." —PC Magazine

"Ted Rall's Snowden is a dramatic, evocative, thoughtful and very accessible account of one of the most important stories of the century – and one of the most ominous, unless citizens are roused to action to rein in abusive state power." —Noam Chomsky

"Written for adults but accessible to teens and sophisticated tweens, this work belongs in all libraries and will supply focus and background – if not unanimity – to everyone interested in government oversight issues." —School Library Journal

"For all self-respecting citizens pressed for time, Ted Rall's story of the heroic whistleblower, Edward Snowden, is essential reading as 'Big Brother' starts having to look over its shoulders." —Ralph Nader

“His book, at 225 pages long, is actually extremely useful even to someone who knows the Snowden story relatively well. Rall clearly lays the story out in a comprehensive, surprisingly enjoyable way, and his signature, colorfully wry figures in text-heavy panels lend a whimsy and absurdity which match Snowden’s saga.” —Steven W Thrasher, The Guardian

“Through comically drawn figures and thorough yet uncomplicated blocks of text, Rall chronicles former NSA contractor Snowden’s early life, work experience, personality and political evolution. The unabashedly pro-Snowden deep-dive serves to help answer the questions: Of the countless government employees who knew of these programs, why was Snowden the one to risk everything to uncover them? And would we have done the same had we been in his position?” —Lauren Walker, Newsweek