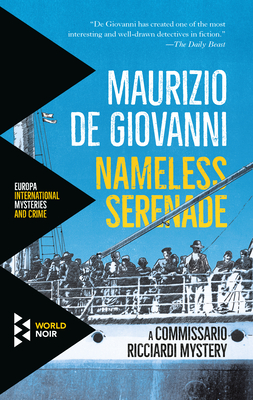 The ninth Commissario Ricciardi Neapolitan mystery is "noir with a heart, haunting and beautiful . . . A literary thriller of exceptional quality" (NB Magazine).

Years ago, Vinnie Sannino left Naples on a ship bound for America, where he found fame and fortune as a boxer. But his gilded life in the new world came to an abrupt end when, during a fight, with a heavy punch to the head of his opponent, Vinnie killed a man in the ring.
Now, Vinnie's back in Italy, pining for the woman he left behind. Cettina, however, is now a married woman. She was, at least, until her husband was recently found dead, killed by a single blow to the head. For Commissario Ricciardi, one of the most faceted cops in fiction, and his partner Maione, it is a going to be a long, rainy, week in Naples. "Deep melancholy infuses the crafty whodunit plot of de Giovanni's superior ninth mystery set in 1930s Italy . . . Ricciardi, who's literally haunted by visions of the dead, continues to be one of the most nuanced and intriguing sleuths in contemporary crime fiction."--Publishers Weekly (starred review) "De Giovanni is one of the best historical crime writers out there. His Commissario Ricciardi novels, set during the fascist period in Italy, are intelligent and totally engrossing. Nameless Serenade is a perfect addition to the series; a really satisfying murder mystery, an insight into 1930s Naples and a thrilling chapter in the life of the Commissario. Lyrical prose and intriguing rounded characters contribute to making this one of the finest in the Ricciardi chronicles."--NB Magazine
Maurizio de Giovanni's Commissario Ricciardi books are bestsellers across Europe, having sold well over one million copies. De Giovanni is also the author of the contemporary Neapolitan thriller, The Crocodile (Europa, 2013), and the new contemporary Neapolitan series, The Bastards of Pizzofalcone. He lives in Naples with his family. Antony Shugaar's translations for Europa Editions include For Grace Received by Valeria Parrella, Everybody's Right by Paolo Sorrentino, Fabio Bartolomei's Alfa Romeo 1300 and Other Miracles, and Margherita Dolce Vita by Stefano Benni.