The Living Infinite: A Novel (Paperback) 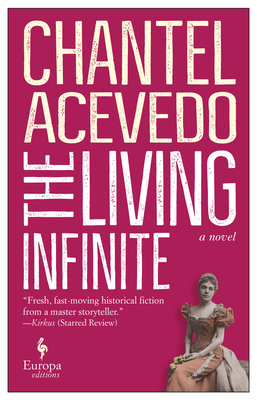 The Living Infinite: A Novel (Paperback)


Not On Our Shelves—Ships in 1-5 Days
The Living Infinite is based on the true story of the Spanish princess Eulalia, an outspoken firebrand at the Bourbon court during the troubled and decadent final years of her family's reign.

After her cloistered childhood at the Spanish court, her youth spent in exile, and a loveless marriage, Eulalia gladly departs Europe for the New World. In the company of Thomas Aragon, the son of her one-time wet nurse and a small-town bookseller with a thirst for adventure, she travels by ship first to a Cuba bubbling with revolutionary fervor then on to the 1893 Chicago World Fair. As far as others are concerned, she is there as an emissary of the Bourbon dynasty and a guest of the Fair. Secretly, she is in America to find a publisher for her scandalous, incendiary autobiography, a book that might well turn the old world order on its head.

Acevedo's new novel is an atmospheric and gripping tale of love, adventure, power and the quest to take control of one's destiny. Bourbon Spain, Revolutionary Cuba, and fin de siècle America are vividly rendered and Eulalia's personal rebellion will resonate with many readers.
Chantel Acevedo was born in Miami to Cuban parents. She is the author of A Falling Star (Carolina Wren Press, 2014), Love and Ghost Letters (St. Martins, 2006), winner of the Latino International Book Award, and The Distant Marvels (Europa, 2015). Acevedo is an Associate Professor of English in the MFA Program of the University of Miami.
Praise for The Living Infinite

"A vivid and enthralling tale of love and redemption.”
—Booklist

"...this little-known but fascinating piece of history should appeal widely.”
—Library Journal

"The defiant, adventurous spirit of Eulalia gleams throughout this historical novel."
—Elle Magazine

"[An] enchantingly scented breeze of a novel [that] held me rapt from its opening page."
—Seattle Times

“A gripping fictional tale of one woman’s quest to break from the rigors of palace life and pursue an independent autonomous course. [...] An engaging read sure to inspire armchair historians and those, like Eulalia, tired of having their voices ignored.”
—The Gazette "Spellbinding, [...] expressive and rich [...] What is so compelling about Acevedo’s fictional and historical tale is the deft and illuminating ways she paints the many lives of women who lived in a century that favored men and their escapades."
—The Miami Rail

“Through gem-like clarity and sparkle, Acevedo gives readers a glimpse into the past...entertaining and insightful.”
—Midwest Book Review

“Acevedo mixes historical facts with her own inventions in such a masterful way that it is impossible to distinguish where history stops and Acevedo’s imagination begins. That, and her keen and sparing use of vivid details [...], marks The Living Infinite as a masterwork of historical fiction.”
—Ploughshares

"Acevedo here makes a significant contribution to contemporary literature...This is a major, uniquely powerful, and startlingly beautiful novel that should bring Acevedo's name to the top echelon of this generation's writers."
—Booklist (Starred Review)

"Rich and engrossing...quite aside from the human perceptivity and warmth that distinguish The Distant Marvels, is a writing style of an elegance rarely encountered in contemporary fiction."
—Philadelphia Inquirer

"The Distant Marvels is a wonderful story about the stories we tell each other and what they reveal about ourselves."
—The San Francisco Chronicle

"Acevedo takes a great story to another level with her remarkable storytelling."
—Cedar Rapids Gazette