Bound in Venice: The Serene Republic and the Dawn of the Book (Paperback) 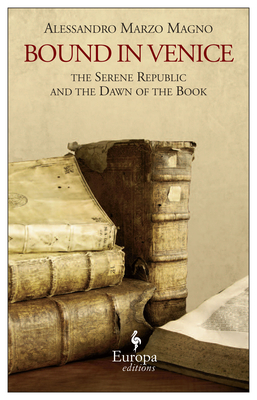 Bound in Venice: The Serene Republic and the Dawn of the Book (Paperback)


Special Order—Subject to Availability
A highly readable but erudite book in the style of Alberto Angela's A Day in the Life of Ancient Rome and Stephen Greenblatt's The Swerve, this is the incredible story of Venice at a time when it was the mercantile and cultural capital of the world. There, in the fifteenth and sixteenth centuries, the first real publishing houses open for business leading to an explosion of the written word and an unprecedented diffusion of human knowledge. In Venice, and subsequently in much of the civilized world, bound printed editions of the Talmud, the Koran, the works or Erasmus of Rotterdam, and classics of Greek and Latin poetry and theater will circulate for the first time, bringing about a true revolution and the birth of the modern.

Among the innovators who are driving these new cultural enterprises, one remarkable visionary, Aldus Manutius, credited with inventing the figure of the modern publisher, stands head and shoulders above the rest. This is his story, and the story of the incredible city that allowed such an innovator to thrive.
Alessandro Marzo Magno was born in Venice, Italy in 1962. He worked as a journalist for various newspapers and was chief editor of the foreign affairs desk at Diario for ten years. He has since published ten books. He lives in Milan with his wife and two children.

Gregory Conti's translation for Europa Editions inclue Alessandro Barbero's The Eyes of Venice and Alberto Angela's A Day in the Life of Ancient Rome, which was voted a Best Book of the Year by the Kansas City Star and became an Indie Bound best seller.
Praise for Bound in Venice

"In this hymn to books, Marzo Magno delves into the delectable intrigues of Renaissance Venice with a degree of detail that will mesmerize readers."
—La Repubblica