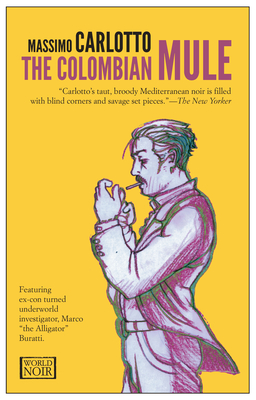 In The Colombian Mule, Carlotto brings to riveting life the story of Arías Cuevas, who sets in motion a chain of bloody events when police catch him trying to carry a shipment of La Tía’s cocaine into Italy. The intended recipient of the coke appears to have been art smuggler Nazzareno Corradi. But Corradi has been set up. He hires “the Alligator” to get him out of the mess he’s in. Meanwhile, La Tía, a notoriously ruthless figure in the Colombian drug trade, is determined to move her operation to Italy, where cociane has beome all the rage among the professional classes. There’s only one thing standing in her way: the Alligator.

The Alligator, an ex-con turned investigator, and his two companions, former underworld heavy Baniamino Rossini and Max the Memory, are among Massimo Carlotto’s most vivid noir creations. Together, the three men will wade deep into a criminal world of few scruples, testing their own strict and specific moral code along the way.
Massimo Carlotto was born in Padua, Italy. In addition to the many titles in his extremely popular Alligator series, he is also the author of The Fugitive, Death's Dark Abyss, Poisonville, Bandit Love, and At the End of a Dull Day. One of Italy's most popular authors and a major exponent of the Mediterranean Noir novel, Carlotto has been compared with many of the most important American hardboiled crime writers. His novels have been translated into many languages, enjoying enormous success outside of Italy, and several have been made into highly acclaimed films.
Praise for Massimo Carlotto

“Massimo Carlotto has a history as riveting as any novel.”
—Chicago Tribune

“Carlotto is the reigning king of Mediterranean noir.”
—The Boston Phoenix

"In hardboiled fiction, there is this hardcore Italian guy I suggest: Massimo Carlotto. Tough as fuck."
—Guillermo del Toro, Director

“Carlotto’s taut, broody Mediterranean noir is filled with blind corners and savage set pieces. Pellegrini’s deeds are unquestionably loathsome, but his witty Machiavellian perspective, amplified by a class rage well attuned to the current Italian zeitgeist, makes you root for him all the same.”
—The New Yorker

“Carlotto [...] provides a machine-gun pace, a jaundiced eye for political corruption and a refreshing absence of anything approaching a moral vision.”
—Kirkus Reviews