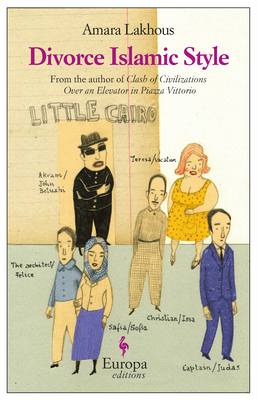 The Italian secret service has recieved intel that a group of Muslim immigrants based in Rome's Viale Marconi neighborhood is planning a terrorist attack. Christian Mazzari, a young Sicilian court translator who speaks perfect Arabic, goes undercover to infiltrate the group and learn who its leaders are. Christian poses as Issa, a recently arrived Tunisian in search of a place to sleep and a job. He soon meets Sofia, a young Egyptian immigrant whose life with her husband, Said a.k.a Felice, an architect who has reinvented himself as a pizza cook, is anything but fulfilling.

In alternating voices, with an anthropologist's keen eye and with sparkling wit Lakhous examines the commonplaces and stereotypes typical of life in multicultural societies. Divorce Islamic Style mixes the rational and the absurd as it describes the conflicts and the contradictions of today's world. Marvelous set pieces, episodes rich in pathos, brilliant dialogue, and mordant folk proverbs combine as the novel moves towards an unforgettable and surprising finale that will have readers turning back to the first page of Lakhous's stunning novel to begin the ride all over again.
Amara Lakhous was born in Algiers in 1970. He has a degree in philosophy from the University of Algiers and another in cultural anthropology from the University la Sapienza, Rome. Clash of Civilizations Over an Elevator in Piazza Vittorio (Europa Editions, 2008) was awarded Italy's prestigious Flaiano prize and was described by the Seattle Times as a "wonderfully offbeat novel." Lakhous lives in Italy.

Ann Goldstein is an editor and head of the copy department at The New Yorker. Her translations for Europa Editions include novels by Elena Ferrante, Alessandro Piperno, Romano Bilenchi, and Giancarlo de Cataldo.
Praise for Divorce Islamic Style

"The author's real subject is the heave and crush of modern, polyglot Rome, and he renders the jabs of everyday speech with such precision that the novel feels exclaimed rather than written."
—The New Yorker

"What's memorable about Lakhous' novel is what he shows us of an often inward-looking nation confronting the teeming vibrancy of multicultural life."
—NPR's Fresh Air

"Do we have an Italian Camus on our hands? Just possibly...No recent Italian novel so elegantly and directly confronts the 'new Italy.'"
—Philadelphia Inquirer

"French and British literatures have long been enriched by the biculturalism of authors like Tahar Ben Jelloun, Amin Maalouf, Gaitam Malkani, and Monica Ali. With talented new writers like Lakhous, Italy is closing the gap."
—The New York Times

"As a novelist of culture clash, Lakhous has the faculty to maintain colorful voices with the luxury of introducing political themes as instantiations of character."
—Bookforum