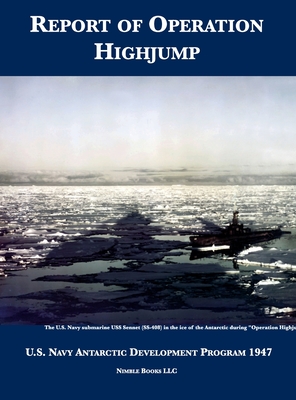 By U S Navy

Operation Highjump, officially titled The United States Navy Antarctic Developments Program, was a United States Navy operation organized by Rear Admiral Richard E. Byrd, Jr., USN that sent 4,700 men, 13 ships, and 33 aircraft to establish the Antarctic research base Little America IV. This 543-page volume is the full account of the operation. At the time of this reproduction, per OCLC's WORLDCAT global library catalog,

the original printed copies were available in only two libraries in the world, the Naval Postgraduate School Library in Monterey and the Canterbury University library in New Zealand.

The story of the doomed polar expedition will appeal to fans of such outstanding writers as John Campbell, Charles Stross, Alastair Maclean, and Dan Simmons, who have all written exciting novels in similar settings. This completely factual account will also provide valuable ballast to credulous viewers of programs such as ANCIENT ALIENS and its fanciful stories of Nazi submarines and aliens in Antarctica.