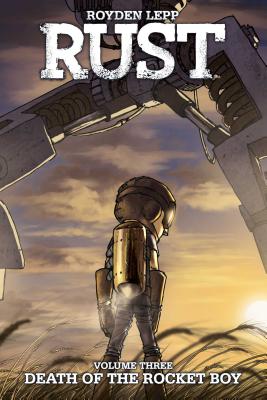 This is book number 3 in the Rust series.

Rocket Boy, Jet Jones, must choose between protecting the Taylors and being part of the family he’s always wanted.

Rocket Boy, Jet Jones, goes out of his way to prove himself to the Taylor family who have taken him in, but when shadows of his past arrive on the farm opening old wounds, he realizes his days of running may finally be numbered. Royden Lepp’s Rust: Death of the Rocket Boy is the penultimate installment of Jet’s ongoing adventure as he confronts his maker, Oswald, and struggles to protect the Taylors from new threats.
Royden Lepp was born on the Canadian prairies of Manitoba. He grew up the son of an oil painter and a farmer and he’s been drawing since he could hold a pencil. Royden failed his 12th grade art class for drawing comics instead of assignments, and was kicked out of 10th grade math for animating in the corner of his textbook. He now writes and illustrates childrens books and graphic novels while working full time as an animator in the Seattle games industry. He lives in the Seattle area with his wife, Ruth.